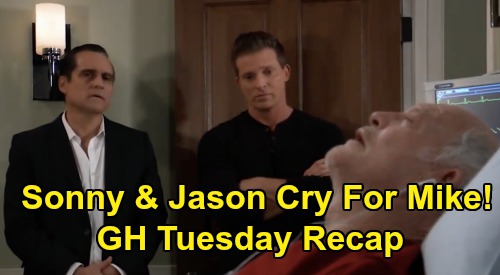 General Hospital (GH) spoilers recap for Tuesday, May 19, reveal that Michael Corinthos (Chad Duell), Willow Corinthos (Katelyn MacMullen), and Carly Corinthos (Laura Wright) talked at the Metro Court as they were on break from the hearing. They collectively wondered what Julian Jerome (William deVry) was thinking by marrying Nelle Jerome (Chloe Lanier). Diane Miller (Carolyn Hennesy) showed up and said that Nelle just wanted to produce a husband because Michael got married.

Michael asked if marrying Julian hurt Nelle’s case, and Martin Grey (Michael E. Knight) materialized, saying they shouldn’t count their chickens. Diane needled Martin about Nelle’s choice of Julian, and everyone bickered back and forth about whether Nelle marrying Julian was any different than Michael marrying Willow. Martin took particular delight in egging Willow into an argument.

Michael and Willow took off, then Carly walked away after refusing to serve Martin lunch. Diane told Martin that she’d love to question Julian on the stand, and Martin said that people in glass houses shouldn’t throw stones, glancing toward Carly.

Carly then semi-threatened Martin, saying that if he used Sonny Corinthos (Maurice Benard) against Michael, it would be his funeral.

Diane joked it all away as a figure of speech, and Martin took off. Diane blasted Carly for running her mouth and told her not to let Martin goad her into conversation. Carly and Diane then regrouped with Michael and Nelle, and they all headed back to court.

Meanwhile, at the courthouse, Sonny asked Julian why he was throwing in with Nelle. Julian tried to walk away, but Jason Morgan (Steve Burton) appeared, preventing him from leaving.

Julian attempted to explain that he and Nelle clicked after she came in the bar one night and they decided to make a home for Wiley Quartermaine Corinthos (Erik and Theo Olson). Sonny told Julian to annul the marriage immediately.

At Crimson, Nelle, who had just changed out of her wedding dress, encountered Nina Reeves (Cynthia Watros). Nelle said that she wanted to see if Nina would testify on her behalf, and Nina mentioned that she had recently decided to look for her own daughter.

Nelle was happy for Nina and said that Nina was the gold standard of Moms.

A stunned Nina then heard all about how Nelle married Julian. Nelle spun a story about how she and Julian decided to marry for Wiley’s sake, so that Michael didn’t get custody of the little boy.

But soon, Nelle revealed that she had something on Julian and that it was in Julian’s best interest to marry her. Nina was shocked that Nelle had blackmailed Julian, but Nelle said that desperate times called for desperate measures.

Nelle said that they were both mothers and that no one should take their children away from them. This seemed to strike a chord in Nina. Nelle said that the hearing was about to reconvene, and she asked Nina if they were good. “You’re the only friend I have. I would like to count on you this afternoon,” Nelle said. “Yes, I can do this for Wiley,” Nina said. Nelle and Nina hugged.

At Charlie’s Pub, Franco Baldwin (Roger Howarth) entered with a bouquet of flowers while on the phone with Elizabeth Baldwin (Rebecca Herbst). Elizabeth said she wouldn’t have time to meet him at the pub, and Franco said that he wanted to see her to apologize.

Elizabeth didn’t think that he needed to apologize again – after all, Nikolas Cassadine (Marcus Coloma) had helped her get beyond what had happened.

Scott Baldwin (Kin Shriner) walked into the pub and sat with Franco. Scott noticed the flowers and he and Franco talked a bit about Nikolas and Elizabeth. Scott didn’t think that Franco should trust Nikolas around Elizabeth, given their history. Franco said that he trusted Elizabeth, and Scott told him to “trust but verify.”

At Turning Woods, Nikolas sat with Mike Corbin (Max Gail), who was nearly catatonic. Nikolas talked to Mike about Spencer Cassadine (Nicolas Bechtel) as Elizabeth watched from the doorway.

Afterwards, Elizabeth and Nikolas talked about Spencer, with Elizabeth encouraging Nikolas to choose his son over his fortune. Nikolas didn’t think it was that simple. Nikolas also mentioned that Ava Jerome (Maura West) and Franco had gotten closer recently, which Elizabeth didn’t really know how to interpret.

Elizabeth went to see Mike, and Sonny and Jason materialized in the hallway. Sonny told Nikolas that he heard about Spencer’s ultimatum, and that Nikolas had dug his own grave when he married Ava. Nikolas left, and Elizabeth returned, telling Sonny and Jason that Mike was sleeping a lot now, as much as 16-18 hours per day.

Sonny went into see Mike, who remained pretty much catatonic throughout Sonny’s visit, while Jason asked Elizabeth what was going on with Mike. Elizabeth said that when patients with Alzheimer’s start sleeping like this and refusing to eat, they have given up.

Meanwhile, Sonny talked to Mike about Michael’s custody hearing and about Wiley, ending up in tears as he said that he thought they’d have more time together. Sonny returned to the hallway where Jason and Elizabeth were. Elizabeth left, and Sonny asked a distraught Jason what Elizabeth had said. Jason relayed Elizabeth’s words to Sonny, with both men in tears.

At the gym, Nikolas was hitting the punching bag when Franco entered. Nikolas mused that he had just seen Elizabeth at Turning Woods, and Franco assumed that meant that Elizabeth had forgiven Nikolas.

Nikolas asked if that was a problem for Franco, and Franco said no. After some tense back and forth about Nikolas and Elizabeth’s friendship, Nikolas brought up Franco’s friendship with Ava. Franco thought that wasn’t a good comparison, and Franco was left unsettled.

Franco then went to GH with his flowers, where he apologized in person to Elizabeth. Elizabeth insisted there was nothing to forgive, and she said that Nikolas helped her get over her insecurities.

That was a great GH episode, and there’s more coming tomorrow, so stay tuned! Stick with the ABC soap, and we’ll be sure to keep you current with all the hot new spoilers and news. At CDL, we’ve got all your soap updates!