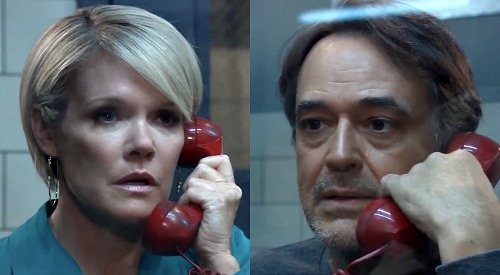 General Hospital (GH) spoilers tease that Ryan Chamberlain (Jon Lindstrom) will once again get the upper hand when it comes to his “goddess” Ava Jerome Cassadine (Maura West).

Ava has just received a collect call from the Pentonville inmate, and GH viewers know exactly what it’s about, since Ryan has recently received a letter from the late Nelle Benson Jerome (Chloe Lanier).

That letter spells out some troubling actions taken by Julian Jerome (William deVry) – action that could very well get him killed if Sonny Corinthos (Maurice Benard) finds out about them.

Well, it looks like Ava is going to accept the call from Ryan, and she just might get an earful from him about how he holds Julian’s life in his hands.

Ryan might not have a chance to spill all the sordid details about how Julian kept Wiley Quartermaine Corinthos (Erik and Theo Olson) from his real family and tried to kill Brad Cooper (Parry Shen), but he’ll probably just need to mention that Nelle sent him an interesting letter about Julian for Ava to realize that this is serious.

Certainly, Ryan is going to want something in exchange for keeping the information about Julian quiet. But what will he want? One possibility is that he’ll want help escaping from Pentonville, but there might be something that Ryan wants even more than that.

What if Ryan decides to blackmail Julian and Ava for the one thing that he wants more than anything…Ava. Ryan could demand ongoing visits and civility from Ava in exchange for his silence about Julian.

Right now, it’s not clear whether Ryan knows that Ava and Nikolas Cassadine (Marcus Coloma) are a married couple. Ryan may not know about it, and a visit with Ava could lead to that revelation, which should sufficiently infuriate him.

Ryan won’t like the thought of another man being with Ava, and he may press for details about the marriage and about Nikolas. Who knows, Ryan could even feel a murderous impulse when it comes to Nikolas!

There’s another possibility here, too, and that’s that Nikolas could try to capitalize on Ava’s terrible situation with Ryan.

After all, Martin Gray (Michael E. Knight) recently told Nikolas that the courts could look at “infidelity” in different ways – even in an “emotional affair” type of way. And since Ava and Nikolas’ post-nuptial agreement doesn’t specify exactly what it means to “cheat,” that leaves it open for the courts to interpret.

Nikolas might try to argue that Ava is carrying on an emotional affair with Ryan by going to visit him regularly, even though he knows or suspects that she’s doing it because she’s being blackmailed.

This could get bad for Ava, who might have to go see Ryan on the regular to keep Julian out of jail. But in doing so, she could end up looking like she’s breaching the post-nuptial agreement that she’s got with Nikolas…and forfeiting the bulk of the Cassadine fortune!

We’ll see if it all comes to this, but something tells us that Ryan is going to turn into a serious problem for Ava. Of course, Ava would do anything to protect Julian, but will she be willing to risk losing a fortune for him?

Stay tuned to the ABC soap and remember to keep CDL bookmarked do you don’t miss any of the latest General Hospital spoilers, daily episode recaps, or news. We’re you’re go-to source for all the soaps!