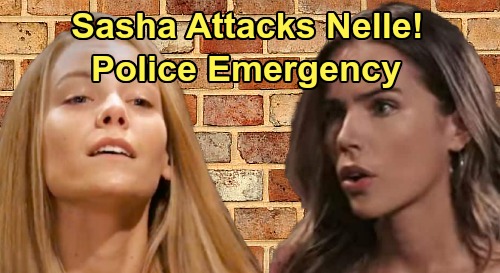 General Hospital (GH) spoilers tease that Nelle Benson (Chloe Lanier) could land in some trouble soon after her release from Pentonville. She’ll make a shocking announcement during the week of January 13-17, which may involves confessing she’s Shiloh Archer’s (Coby Ryan McLaughlin) widow.

Shiloh’s memorial mayhem will lead to some outraged Corinthos family members – including Josslyn Jacks (Eden McCoy). Before Nelle was locked up, GH fans know Josslyn had a fierce faceoff with Nelle down by the docks.

General Hospital spoilers say Joss will end up down by the docks again, and that’s where Michael Corinthos (Chad Duell) will find his sister on January 21.

It’s possible Nelle and Josslyn will go for another round, but it’s too early to tell just yet. However, we should note that Nelle will be awfully rattled that same day. There’s someone else Nelle may target, but she could be startled when this person fights back in a big way.

Will Nelle push Sasha Gilmore’s (Sofia Mattsson) buttons or leave Sasha fearful for Joss somehow? No one in Port Charles knows what to expect when it comes to Nelle. Everybody just knows she’s dangerous and capable of anything.

Sasha will feel that’s the case if Nelle provokes her and perhaps leaves her in the position to defend Joss or herself.

On January 22, which is the day after Nelle’s left shaken, Michael will back Sasha up. He’ll rush to Sasha’s defense, which could mean Sasha will use some force with Nelle. Michael may feel that it was justified under the circumstances.

So basically, we’ll have some Nelle confrontation that gets out of hand and leaves her distressed. Then, Michael will stick up for Sasha – who potentially caused Nelle’s injury. Jordan Ashford (Briana Nicole Henry) will be called to deal with an emergency around this time.

It sounds like Nelle will be able to play the “woe is me and my one kidney” victim card again.

Nelle will be unnerved by this encounter at first, but it may serve two important purposes. 1) It could convince Nelle to retaliate and try to get Sasha out of the picture. 2) Nelle might use this is leverage if she somehow manages to avoid guilt in the baby swap.

Nelle may hope for more incidents to make Michael and his crew look dangerous if a custody battle happens.