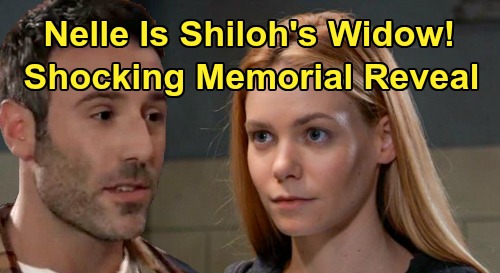 General Hospital (GH) spoilers tease that Nelle Benson (Chloe Lanier) will pull the trigger on the next phase of her plan. GH fans know Nelle’s been quietly plotting behind bars. She’s got her vision board to remind her of all her goals. Nelle also has Martin Gray (Michael E. Knight) in her corner and an ace up her sleeve, so she’s almost ready to make a bold move.

However, the most intriguing invitation was the one Michael Corinthos (Chad Duell) received – and it could be the biggest hint about who’s actually behind this memorial.

Nelle’s the most likely candidate and happens to connect all these characters. Willow believes she’s “Wiley Cooper-Jones’” (Erik and Theo Olson) birth mom, so Nelle has every reason to mess with her. Harmony is Willow’s mother and Nelle’s former cellmate.

Sam also holds the former cellmate title and is connected to the Corinthos clan through Jason Morgan (Steve Burton).

As for Michael, he’s the huge tipoff that Nelle wants to make a big statement – and she wants everyone on hand for it. Nelle probably set up this memorial with Martin’s help and intends to make her first public appearance as a free woman. She’s likely rounding up all these people with the intention of riling them up.

General Hospital spoilers say Nelle will make a stunning announcement during the week of January 13-17. The revelation that Nelle is Shiloh’s widow certainly fits the bill. Of course, the news of Nelle’s release from Pentonville could be part of that.

Carly Corinthos (Laura Wright) will immediately figure out this is just another game of Nelle’s. She’ll be furious from the moment Nelle’s out of prison garb. It may not take Michael long to suspect this is really about those ELQ shares. Nelle feels the Quartermaines cheated her and is eager to get her piece of the pie.

General Hospital spoilers say Brad Cooper (Parry Shen) will fly into a panic around this time. As for Willow, she’ll grow fearful for “Wiley.” Based on Nelle’s interaction with “Wiley” at GH, Willow just won’t think he’s safe.

Willow doesn’t know “Wiley” is actually Nelle’s son with Michael, but she knows Nelle’s insane and capable of anything. That’ll be enough to spark Willow’s concerns.

It sounds like Nelle will make quite a splash at this memorial! She should leave many Port Charles residents wondering what chaos she’ll unleash next.