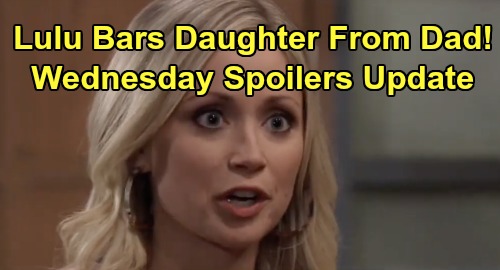 General Hospital (GH) spoilers update for Wednesday, January 8, teases that Ava Jerome (Maura West) will wake up and search for her gun. When it’s not under her pillow, Ava will turn to see that Nikolas Cassadine (Marcus Coloma) has it. Nik will aim the gun straight at Ava and ask if she’s looking for this, so Ava will look a bit unnerved.

Fortunately, no bullets will be pumped in Ava on this morning after their wedding. Meanwhile, the news of Nikolas’ survival will spread across Port Charles. Sam McCall (Kelly Monaco) and Alexis Davis (Nancy Lee Grahn) will get updates from Carly Corinthos (Laura Wright).

Carly will inform them that Nik is alive and well in Port Charles, so that’ll be a lot for Alexis and Sam to process.

Carly will explain all the wedding drama and Nik’s mission to take back the Cassadine estate. Sam and Alexis will be stunned by Nikolas’ commitment to this scheme.

Nikolas  stayed away from his family for years, so it’s easy to see why Laura Webber (Genie Francis) was so upset with him. Nik has some work to do before he can earn the forgiveness of his loved ones.

As for Sam, she’ll manage to get on her mom’s bad side. General Hospital spoilers say Sam will make a move that Alexis doesn’t like – and she won’t be afraid to speak her mind about it!

Alexis will scold Sam in Wednesday’s GH episode, so this may be about something regarding Nik or perhaps Jason Morgan (Steve Burton).

Sam can’t have any contact with Jason as part of her parole terms, so that’s left both Sam and Jason heartbroken. There’s a chance Sam will react in some way that Alexis views as risky. As a lawyer and Sam’s mother, Alexis will want to do everything she can to keep Sam out of prison.

Over with Jason, he’ll find Robert Scorpio (Tristan Rogers) and propose a deal. Jason will make a pitch on something and hope Robert’s willing to team up with him.

Next, let’s talk about Gladys Corbin (Bonnie Borroughs). This lady’s too curious for her own good, so it’s time for Sonny Corinthos (Maurice Benard) to set her straight. He’ll mention a surprise for Gladys as he takes her out of the room, but it probably won’t be a pleasant one.

Sonny may have to remind Gladys that if she can’t mind her own business, there are going to be consequences.

Other General Hospital spoilers say Lulu Spencer (Emme Rylan) will be prepared for battle. Now that Valentin’s world is blowing up, Lulu won’t want Charlotte Cassadine (Scarlett Fernandez) anywhere near him ever again.

Lulu will rant about Valentin to Laura Webber (Genie Francis) and Nina Reeves (Cynthia Watros), who’ll feel worse than ever her part in the mayhem.

Back with Robert, he’ll stare down a smug Valentin in the PCPD interrogation room. Valentin will think Robert’s going to follow the law and let him go, but Robert won’t be keen on doing that.

However, Valentin has a way of wiggling of trouble. It may not be long until he’s a free man once again.

It sounds like another exciting episode’s coming up. We’ll keep you posted as other GH details emerge. Stick with the ABC soap and don’t forget to check CDL often for the latest General Hospital spoilers, updates and news.