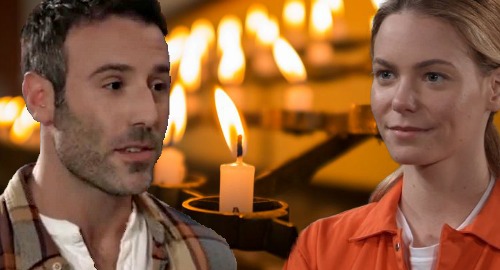 General Hospital (GH) spoilers reveal that Shiloh Archer (Coby Ryan McLaughlin) has been dead for months. As far as most of Port Charles is concerned, it’s good riddance to bad rubbish. So who is planning his memorial service and why?

GH fans know there are still devoted Dawn of Day followers out there. Daisy Kwan (Kelsey Wang) has supported Shiloh since he came to Port Charles. She burned through her trust fund money for Shiloh, so she’s definitely been blinded by loyalty in the past.

Daisy also lied and took the blame for emails Shiloh sent to Sam McCall (Kelly Monaco). She even befriended Kristina Corinthos-Davis (Lexi Ainsworth) to get her into DOD in the first place. Daisy would certainly plan a memorial for Shiloh. It’s possible she’ll pop back up as part of all the drama.

Daisy and other DOD followers would eagerly invite Shiloh’s victims to a memorial service. They continue to support Shiloh, even in death. Dawn of Day’s followers don’t see anything wrong with what Shiloh did to the women he assaulted.

Shiloh’s followers think these women should consider themselves lucky to have been with their charismatic leader.

Of course, Nelle Benson (Chloe Lanier) might be an even better memorial planner option. It was revealed that Nelle secretly married while in prison, but her husband died. General Hospital buzz suggests Nelle married Shiloh in hopes of getting the ELQ shares that Oscar Nero (Garrin Stitt) left to him – shares that Oscar later left to the Kilimanjaro foundation instead.

Oscar’s handwritten amendment to his will should supersede the original, but that won’t stop Nelle from going after what she wants. If Nelle is married to Shiloh as expected, she could assume she’ll inherit his shares of ELQ.

Nelle could plan on revealing this information at Shiloh’s memorial. She’s a sick, narcissistic person who would have no doubt invited Shiloh’s victims to his memorial.

The fact that Michael Corinthos (Chad Duell) got an invitation may point in Nelle’s direction. Nelle doesn’t know when to stop with her hatred and revenge. Her unwillingness to accept defeat is exactly what landed her in Pentonville for attempted murder.

Nelle taunted Sam until she was paroled from prison and would certainly continue to do so after her release.

Nelle is still keeping Michael’s child from him. She might’ve enlisted Martin Grey (Michael E. Knight) to help her to pull off this memorial spectacle. Most roads lead to Nelle on GH, especially since her dream board was revealed.

General Hospital spoilers say Nelle’s got a scheme cooking – and Shiloh’s memorial service could be the first major step.

Is Nelle behind Shiloh’s memorial? Will anyone show up to see who is behind this and what they’re up to? We’ll give you updates as other GH news comes in. Stay tuned to the ABC soap and don’t forget to check CDL often for the latest General Hospital spoilers, updates and news.