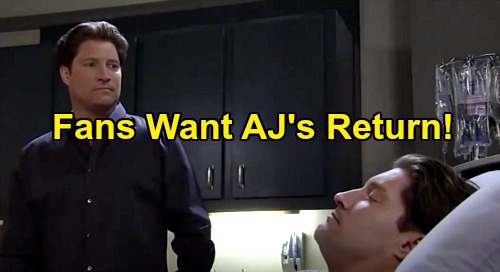 General Hospital (GH) spoilers reveal that one ABC soap alum is speaking out about his exit from the show, which was featured in the latest Flashback Friday episode. GH fans were both delighted and saddened thanks to this General Hospital episode that first aired back in 2014. It featured the death of AJ Quartermaine (Sean Kanan), so it’s easy to see why fans were dealing with mixed emotions!

Many General Hospital viewers are still upset about the show’s decision to kill AJ off – even after all these years. At the same time, that episode brought some incredibly touching scenes, including one that AJ’s portrayer had never seen before.

On Twitter, Kanan sent out a sweet message to fans as he reflected on his GH experience and shared how thankful he is.

“Just watched AJ’s final episode on General Hospital,” Kanan tweeted. “I had never seen that final seen. Lots of emotions. Full of gratitude for my time on the show. #GeneralHospital”

Of course, Kanan was talking about AJ’s famous last moments, which included joining Edward Quartermaine, Lila Quartermaine and Emily Quartermaine (Natalia Livingston) as he crossed over to the other side. As AJ ascended the staircase, he paused before taking Emily’s hand and continuing on.

After watching that gripping episode and reading Kanan’s reaction on Twitter, plenty of General Hospital fans were eager to chime in. “Hated the decision to kill AJ off, but your final episode was very touching and those last scenes were perfection,” one viewer twetted. “However, if the show wanted to undo that and have AJ be alive again, we would have no problem with that!”

“I knew I missed you and AJ,” another General Hospital fan said. “This episode confirmed that. The final scene is a tear jerker” “I hope one day you return to port charles,” said one more fan. “You were such a huge part of the show, and you are definitely missed!”

At least GH fans were treated to a little more AJ in this Flashback Friday offering. As for what the future holds, you never know! Would you like to see AJ Quartermaine return?