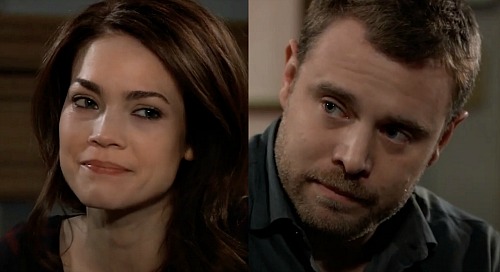 General Hospital (GH) spoilers reveal that Franco Baldwin (Roger Howarth) and Elizabeth Baldwin’s (Rebecca Herbst) marriage woes have some fans reflecting on missed opportunities. Since Liz and Franco have been in a stable, loving relationship for quite some time, it hasn’t really opened the door to a lot of other romantic options.

When Franco was memory-mapped into believing he was Drew Cain, he got together with Kim Nero (Tamara Braun) briefly. However, we all knew that wasn’t going to last. Franco was horrified to learn he slept with Kim once he was back to his old self. It didn’t take long for Liz and Franco to settle back into boring married life.

Of course, there’s value in having some stable couples on soaps, but it’s the stable ones who tend to stay on the backburner. Now Franco and Liz are facing some issues due to Nikolas Cassadine (Marcus Coloma) and Ava Jerome (Maura West), so that’s giving “Friz” a story.

It’s also leading some fans to wonder if Franco and Liz are truly in the safe romantic category anymore. Is it time for a shakeup? If so, is Nikolas really the best match for Liz?

GH seems to be playing it like Nik and Ava actually have buried feelings they’re not addressing. Nikolas is also trying to manipulate Liz, which isn’t a great way to begin a new romantic chapter.

Although there are some hints about Liz and Franco potentially realizing what Ava and Nikolas are up to, this “Friz” conflict could still set up more problems. Between their mounting money drama and Franco’s ability to put his foot in his mouth, there are certainly ways for GH to keep crumbling Franco and Liz.

Many General Hospital fans felt like the real Drew Cain (Billy Miller) would’ve been a good way to go. Miller and Herbst had great onscreen chemistry back when Drew was Jake Doe. This “Friz” conflict is a crack in their romance, which could repaired or grow wider based on how GH writers choose to take things.

If Liz were to split from Franco down the road, it’d be nice if Drew could return and find love with Liz. That’d bring some interesting drama since Franco and Drew established a friendship before Drew’s presumed death.

General Hospital could never find a proper love interest for Drew after the real Jason Morgan (Steve Burton) came back, but maybe that’s just because they were unwilling to explore Liz and Drew!

Since GH tends to make Jason and Sam McCall (Kelly Monaco) the couple to root for, it could make a “Dream” reunion unlikely if Drew ever returns. Maybe Drew and Liz would be a better way to go.

Would you like to see Drew come back and get together with Liz? If Liz and Franco’s conflict drives them apart, would Drew be a better match for Liz than Nikolas?