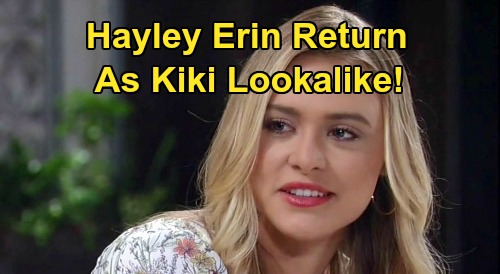 General Hospital (GH) spoilers reveal that there’s one ABC soap star that many fans would like to see back on canvas. Hayley Erin (Kiki Jerome) was a popular actress at GH before her departure in 2018. Kiki was brutally murdered by Ryan Chamberlain (Jon Lindstrom), so that shocker hit Port Charles hard.

Of course, any death can be undone in the soap world, so never say never on Kiki’s return. There could be some soapy explanation for why Kiki isn’t so dead after all! However, there’s another option to consider – and we want to know what you think about it. How would you feel about Hayley Erin coming back to play a completely different character?

That led to Easton taking on the role of Hamilton Finn – and everyone accepts him just fine at this point. We’re all used to Finn by now, so we could get used to Erin playing someone else, too.

General Hospital could even play up Kiki’s resemblance to Erin’s new character in a storyline. Just imagine how freaked out Ava Cassadine (Maura West) would be!

Ava would feel haunted by Kiki all over again, even if this character’s similar looks were just an eerie coincidence. The initial shock of meeting this person might be enough to make Ava faint.

From there, Ava could either find herself drawn to Erin’s character or hate her guts – simply because she’s not the real Kiki! There’d be some interesting issues to play around with in a story like that.

As for Erin, her new character could be paired up with tons of eligible bachelors around town. That’s especially true if this character came on the scene as somebody unrelated to anyone else in Port Charles.

Would you like to see Hayley Erin play a new character or do you only want her back as Kiki? As other news rolls in, we’ll provide updates. General Hospital spoilers say the excitement will rev up once GH is back in production and can deliver new episodes.

CDL will have lots of other fantastic General Hospital spoilers, updates and news to deliver, so be sure to drop by regularly for the latest.