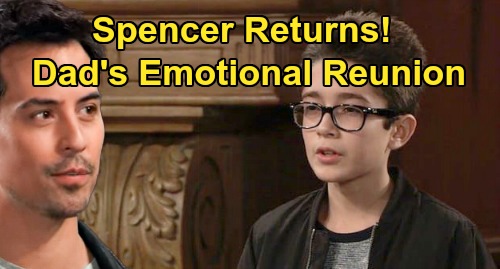 General Hospital (GH) tease that Nikolas Cassadine (Marcus Coloma) will have to face the one person he’s dreading most. Nik loves his son and is undoubtedly eager to reconnect, but he’s also worried about Spencer Cassadine’s (Nicolas Bechtel) reaction.

As Laura Webber (Genie Francis) pointed out, Spencer went off the rails a bit after Nikolas’ “death.” It became Spencer’s mission to avenge his father and take back his birthright.

Spencer had to be sent to Europe after all that drama, so Nik’s decision to stay away changed his son’s life drastically. It’s been hard for Spencer since Nikolas died, which means some complicated emotions are on the way.

During the week of January 20-24, Nikolas will have to own up to his actions. He’ll come face to face with Spencer, so this will give Nik a chance to explain himself. Nikolas is hoping that Spencer can understand why he had to stay out of the picture and put all the pieces of his plan in motion. He didn’t want to strike too soon and blow Valentin Cassadine’s (James Patrick Stuart) takedown.

If anyone can understand that, it’s Spencer! Even so, it wouldn’t be realistic for Spencer to give Nik a total pass. Spencer needs a chance to unload his anger, but he should share a tearful reunion with Nikolas, too.

Just like with Laura, Spencer will have a lot to wrap his head around. He’ll be relieved, angry, hurt and confused all at the same time.

General Hospital spoilers say forgiveness should come eventually, but Nikolas will have some work to do. He’ll need to earn Spencer’s trust again and make him see that everything he did was for his son’s sake. It should be nice to see Nikolas and Spencer repair their bond – particularly since Nicolas Bechtel is back in the role.

GH was wise to stick with Bechtel’s Spencer. He’s the one we watched go through so much thanks to Nik’s death. Fans will get all the right emotional beats since Spencer wasn’t SORASed and is still the fan favorite we’re used to.