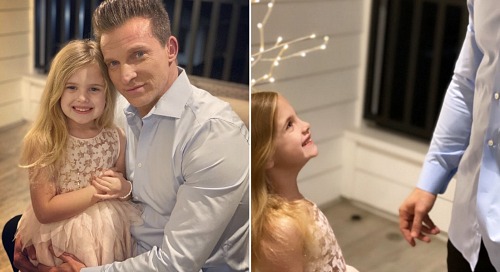 General Hospital (GH) spoilers has some fun news to pass on about popular GH star Steve Burton and his adorable daughter. Steve Burton, who portrays Jason Morgan on the ABC soap, recently shared some photos of himself and his young daughter Brooklyn as they prepared for a Daddy/Daughter dance.

Steve’s caption for the photos reads: “First daddy daughter dance with Brooklyn. She owns me. That is all.” Both Brooklyn and Steve are dressed up and ready for the dance in the photos, and we bet that they had a great time together.

Steve’s followers and Jason Morgan’s General Hospital fans have been liking his post steadily and have been commenting in droves on the sweet photos.

One follower said: “It just doesn’t get any sweeter than this. A little girl’s first love should always be her daddy and the one person to whom all other men in her life must aspire to.”

And another said: “These pictures are priceless! Love the picture of you looking at her! I can tell she is a Daddy’s girl & always will be.”

Another fan replied with a little humor, saying: “How precious! And love that you have on a color!!” Of course, she’s referring to the fact that Steve’s alter-ego Jason Morgan always wears black on GH.

As you might know, Steve and his wife Sheree Burton have been married for 21 years have two additional children aside from Brooklyn – Jake and Makena. Steve frequently posts on social media about what he and his family are up to, and it’s great to see him interacting with his kids and enjoying great family time.

We hope that Steve Burton and Brooklyn had a great time at the Daddy/Daughter dance! Stay tuned to the ABC soap and don’t forget to check CDL often for the latest General Hospital spoilers, updates, and news.

First daddy daughter dance with Brooklyn. She owns me. That is all. ❤️ pic.twitter.com/SHPCPi28Qu