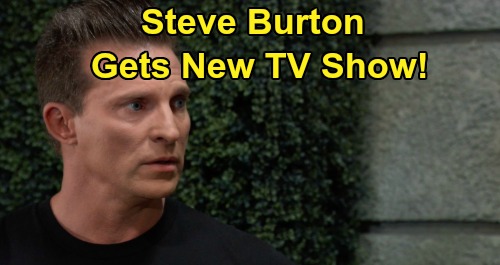 General Hospital (GH) spoilers reveal that Steve Burton (Jason Morgan) is getting a new TV show along with his real-life pal and cohost, Bradford Anderson (Damian Spinelli). Burton and Anderson have a fun podcast called That’s Awesome, which has become quite a success. Now they’re planning to turn it into an entertaining television show, so that’s sure to be a hit with fans, too.

Burton and Anderson have partnered up with a streaming platform called Popstar! TV for this exciting new project. They’ll be delivering a weekly series that features great interviews and hilarious comedy segments.

Anderson and Burton will also include their usual “Seven Questions” portion of the podcast, so that’s terrific news if you enjoy hearing seven answers from their guests.

If you’re wondering when you can catch the first installment of Anderson and Burton’s new series, we’ve got the details. The Popstar! TV streaming platform will have that episode ready to go on Monday, June 22 at 7:30 p.m. PT. You can get Popstar! TV through the Apple App Store, Apple TV, Google Play, Amazon Fire TV, Roku and more.

Again, That’s Awesome will be a weekly series, so this is something GH fans may want to check out again and again. It’s always nice to hear about General Hospital stars doing these side projects and becoming successful outside the main show.

Burton and Anderson clearly have a blast working together, so we wish them the best as they take their podcast to the next level.

As for what’s ahead in Port Charles, Jason will face some new challenges as Sonny Corinthos’ (Maurice Benard) battle with Cyrus Renault (Jeff Kober) heats up. Spinelli will also have to deal with Maxie Jones’ (Kirsten Storms) pregnancy shocker, so that’ll only make him more determined to protect her from Peter August (Wes Ramsey).