General Hospital Spoilers: Brad’s Revenge on Nelle – Gets Out of Prison to Settle the Score? 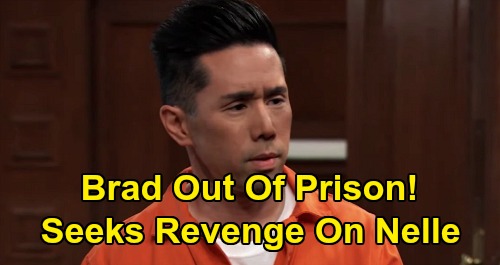 We also know Nelle is Nina Reeves’ (Cynthia Watros) biological daughter, so that’ll be another big storyline for Nelle once GH returns with new episodes. What about Brad though? What does the future hold for this incarcerated character?

It was wrong for Brad to take part in the baby switch and lie right to Michael Corinthos’ (Chad Duell) face for so long. Even so, Brad wasn’t the ringleader in all of this. It was Nelle who pushed weak Brad to swap babies with her that terrible night – only to claim she was completely innocent later!

Whether you love Brad for being a fun schemer or hate him for his horrible behavior, it’s not fair for Brad to go down alone. If Nelle gets to live her life free in Port Charles, Brad deserves that chance, too.

Do you think General Hospital will wind up changing Brad’s fate eventually? It could easily happen with a rewrite about some legal technicality or sentencing issue. Soaps do that kind of thing all the time.

If we can accept rewrites as crazy as the twin memory-mapping mess with Drew Cain (Billy Miller) and Jason Morgan (Steve Burton), we can accept anything. Now that Brad’s a foe instead of a friend, it’d be great to see what he’d do on the outside. Brad can’t target Nelle while he’s locked up at Pentonville, but his freedom could change the game.

Perhaps Brad might even risk that freedom for revenge. Of course, Brad would also have to worry about Sonny Corinthos (Maurice Benard), who delivered some deadly threats before Brad’s guilty plea. You can bet Sonny would be furious if Brad managed to wiggle out of his punishment after all.

Even if GH just holds off for a while and ultimately grants Brad early parole, it’s tough to believe Brad will stay in in the slammer. At some point, Nelle will probably have to deal with the former pal she burned! Will Brad get out of prison to settle the score? As other news and updates come in, we’ll provide all the details.