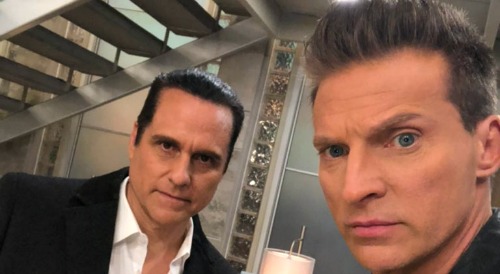 General Hospital (GH) spoilers reveal that fans will soon see more of a fantastic duo. GH fans know Jason Morgan (Steve Burton) is Sonny Corinthos’ (Maurice Benard) right-hand man. If Sonny needs Jason, you can bet Jason will be there in a flash! They’ve got a strong bond and always make a excellent team.

Jason is currently helping Sonny tackle a major threat in Port Charles. Cyrus Renault (Jeff Kober) came on Sonny’s turf and messed with the wrong family. For that, he must pay! General Hospital spoilers say this storyline will continue to deliver hot drama in the weeks ahead. Jason and Sonny will naturally remain at the center of the action.

Of course, there’ll be plenty of other mayhem going on thanks to Michael Corinthos’ (Chad Duell) looming custody battle. That could give Sonny and Jason another fierce war to be part of. If Michael and Carly Corinthos (Laura Wright) need them to step in, Jason and Sonny will certainly pitch in. Nelle Benson Archer (Chloe Lanier) is someone who could be handled in a heartbeat if need be!

Since there’s some exciting stuff in the works at GH, Steve Burton decided to offer a little teaser on Twitter. He posted a fun picture with Maurice Benard and gave his costar a nice shoutout. It’s always wonderful to see the cast getting along and lifting each other up.

“Had some Great scenes with The boss @MauriceBenard today,” Burton said. “Always a pleasure. #sonnyyoda.” Naturally, that got many General Hospital viewers hyped up for when those scenes ultimately air. There’s always something to look forward to in Port Charles.

“Sonny and Jason scenes are always my favs,” one GH fan insisted. Another fan said, “So awesome. Its just not General Hospital without these two.” “It’s always a great day when you and Mo share scenes,” one more viewer gushed. A fan called attention to the classic “Sonny stare” and “Jason brow.”

General Hospital spoilers, news and updates say some twists and turns are brewing. Jason will help Sonny all while dealing with Peter August (Wes Ramsey) chaos, so it’s sure to be a wild ride. GH will definitely deliver some surprises.

As other updates emerge, you can check back for more hot news. CDL will have other General Hospital spoilers and scoops to share.

Had some Great scenes with The boss @MauriceBenard today. Always a pleasure. #sonnyyoda pic.twitter.com/prBjcDIjAz