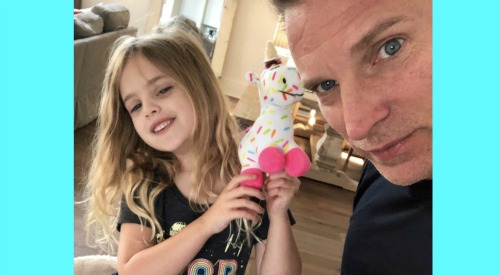 General Hospital (GH) spoilers tease that Jason Morgan (Steve Burton) will be caught up in a whirlwind of activity during February Sweeps this on the ABC show. As GH viewers know, a major turf war has broken out in Port Charles, with a new enemy of Sonny Corinthos (Maurice Benard) having coordinated a series of attacks on the Corinthos family this past week. Jason was caught in the crossfire, and he even stepped in and killed a gunman who was after Sonny.

Of course, on GH, Jason is the enforcer who gets things done and isn’t afraid to defend his boss and himself with lethal force. But in real life, Jason’s portrayer Steve Burton lives a much calmer life. If you’re fortunate enough to follow him on social media, then you know that he’s a family man and frequently posts updates about what he, his wife, and his kids are up to.

Recently Steve took to Twitter to give his followers a glimpse into what his Saturday morning entailed, and it turned out that he spent some time with his daughter Brooklyn playing the board game “Sorry” along with her stuffed animal named “Sprinkles.”

Steve posted a photo of himself and Brooklyn along with the following caption: “Saturday morning fun with Sprinkles and Brooklyn. Sorry not sorry.”

Steve’s fans have been replying to his post in droves, with many commenting on how nice it is to see him spending quality time with Brooklyn. One fan said: “You’re a great example of what all dads should be like! Thank you for spreading the positivity!” And another commented: “Nothing better than this. Enjoy every precious moment.”

As you might remember, we recently posted that Steve and his wife Sheree celebrated their 21st wedding anniversary back in January. They have two other children in addition to Brooklyn – Jake and Makena. It’s great to see Steve and his family enjoying family time together and having fun.

You might also know that Steve is gearing up for some upcoming tour dates on the next leg of his Stone Cold & The Jackal tour, which he does with GH costar Bradford Anderson, who portrays Damian Spinelli.

They’re heading to Texas later this month for comedy performances in Dallas, Houston, and San Antonio, and then they’ll be back in California toward the end of the month in San Diego, San Francisco, and Sacramento.

But back to Steve’s game of “Sorry” with Brooklyn, we’re wondering who was the big winner – Steve, Brooklyn, or Sprinkles?

Do you enjoy seeing Steve’s family updates on social media? Stay tuned to the ABC soap and don’t forget to check CDL often for the latest General Hospital spoilers, updates, and news.