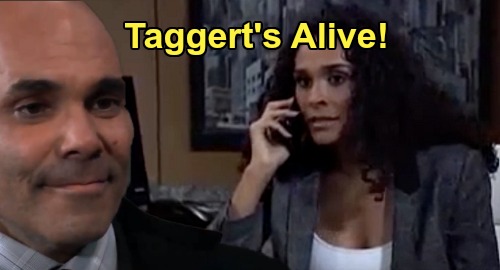 General Hospital (GH) spoilers tease that Trina Robinson (Sydney Mikayla) may get the shock of her life down the road. GH fans know Trina was devastated by her father’s sudden death. The same goes for many General Hospital viewers, who definitely didn’t want to see Marcus Taggert (Real Andrews) killed off.

Of course, it was always a possibility that Taggert might’ve faked his demise. It was the only way to get Cyrus Renault (Jeff Kober) off Taggert’s back and hopefully ensure that Trina would be protected. Fortunately, some new story developments indeed point in that direction. Let’s look at GH’s latest clues.

During a conversation with Jason Morgan (Steve Burton), Jordan Ashford (Briana Nicole Henry) remained uneasy about the plan. The idea of tarnishing the task force members’ reputations wasn’t appealing – especially since Jordan was in this just as deep. It felt wrong for Jordan to let them take the blame, but Jason insisted this is what her team would want.

Jordan suggested they would never know, but she’s keeping a huge secret! Once Jordan was alone, she retrieved a phone from her safe and made a risky call. Jordan admitted she wasn’t supposed to contact this person, but she needed reassurance that what she was about to do was OK. There’s only one logical character for Jordan to be talking to in this case – and that’s Marcus Taggert!

It sounds like Taggert’s in hiding for his own safety as well as the safety of his loved ones. After all, it would’ve been pretty horrible to bring Taggert back just to let him die permanently. There’s no point in outraging General Hospital fans like that. It seems almost certain now that an alive Taggert will make a dramatic return.

Of course, Taggert may have to wait until Cyrus is dead and gone. It’s just too dangerous for Taggert to resurface at this point. Plus, GH writers appear to be laying the groundwork for Trina to be Curtis Ashford’s (Donnell Turner) biological daughter.

Portia Robinson (Brook Kerr) claimed to be sure Taggert was Trina’s father, but we’re betting that’s a bogus story. Portia admitted that Taggert never even knew about her affair with Curtis.

Portia also didn’t tell Curtis she was married when they got together. Obviously, Portia is a secret-keeper to the core! General Hospital spoilers say this Trina secret could explode in a big way, but they have to finish setting it all up. By the time Taggert returns, major daughter drama could erupt.

As other updates emerge, we’ll have more GH news to pass along. Are you glad it looks like Taggert’s alive and well? CDL’s your hotspot for the latest General Hospital spoilers, news and updates, so you can always pop in and read the hottest scoops.