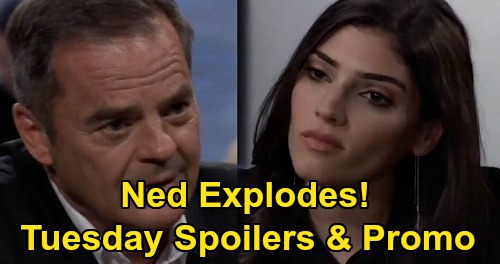 General Hospital (GH) spoilers for Tuesday, March 31, tease that Laura Collins (Jon Lindstrom) will want updates from Mac Scorpio (John J. York). She may get wind of Jordan Ashford’s (Briana Nicole Henry) latest “discovery” and suspect there’s more to the story. Laura will push Mac to tell her what’s going on, but Mac may not have very many details to offer. Jordan’s been keeping everything awfully hush-hush.

Meanwhile, Jordan will move forward with her plan. General Hospital spoilers say Jordan will indeed let her old task force take the blame. GH fans know Jordan’s in the middle of a meeting with someone from internal affairs, so she’s ready to rat out the others. It’ll be tough for Jordan to take this step, but it’s what she has to do to save TJ Ashford (Tajh Bellow).

Jordan will insist she believes her team conspired to tamper with evidence. To avoid going to prison herself, Jordan will have to lie about being completely in the dark at the time. Across town, Trina Robinson (Sydney Mikayla) and Cameron Webber (William Lipton) will discuss where they stand. They just received somewhat conflicting advice, so things may just end up getting messier.

Ava Jerome (Maura West) suggested that Trina shouldn’t be a second choice and pointed out that now was probably a good opportunity to back out. Trina and Cam aren’t in too deep yet, so Ava’s thinking Trina can avoid heartbreak. However, Franco Baldwin (Roger Howarth) talked to Cameron about how friendship can be a great way to start a relationship. Cam still seems unsure of how to proceed.

No matter how Trina and Cameron handle this on Tuesday, it looks like there’ll be more to explore when it comes to their feelings. This should be a topic Cam and Trina have to revisit down the road. In the meantime, Cameron will fill Trina in on his recent session with Neil Byrne (Joe Flanigan). Trina will ask if Cam thinks he needs a therapist, so Cam may admit it helped more than he thought it would.

Let’s hope Cameron can convince Trina that therapy might help her as well. If Trina could open up to a professional about her grief, it’d probably go a long way toward healing. Over with Alexis Davis (Nancy Lee Grahn), she’ll bump into Neil and spark concerns immediately. Once Neil senses that Alexis is upset about something, he’ll wonder if he can be of assistance.

Alexis may not want to complicate things any further, so we’ll see how much she divulges. Next, Britt Westbourne (Kelly Thiebaud) will open up to Julian Jerome (William deVry) about losing her best friend. It sounds like Britt will be reflecting on Brad Cooper’s (Parry Shen) prison stint and the fact that she doesn’t have a lot of other pals who accept her.

At some point, it looks like Britt will spill something that leaves Julian worried. Britt thought she recognized Neil at GH, but she couldn’t quite place him – or so she claimed. General Hospital spoilers confirm there was an unexpected witness to Neil and Alexis’ steamy one-night stand, so it makes sense that Britt was the person gawking in the hall.

Naturally, it’s possible Britt knows Neil from somewhere else as well. Soapy coincidences are the norm on General Hospital! Regardless, Britt’s scoop should lead to Julian attacking Neil soon enough. GH’s weekly promo shows Julian roughing Neil up, so he may feel like Neil took advantage of Alexis in some way.

Other General Hospital spoilers say Portia Robinson (Brook Kerr) will stonewall Curtis Ashford (Donnell Turner) when it comes to talking about the past. Portia admitted that Marcus Taggert (Real Andrews) told her everything he could safely tell her, so Curtis is naturally concerned about the threat she might pose to Jordan.

As Curtis grills Portia and tries to find out the full extent of what she knows, Portia just won’t see how any of this matters now. Curtis may think it matters a great deal since Jordan’s freedom could be on the line! Ned Quartermaine (Wally Kurth) will also be on a mission for answers on Tuesday. General Hospital spoilers say Brook Lynn Quartermaine’s (Amanda Sdtton) news will leave him concerned.

Ned will ask what Brook Lynn gave Linc Brown (Dan Buran) to make him walk away, so Brook Lynn will have to admit it was her ELQ shares. You can bet this will cause another fierce confrontation and even more Quartermaine family drama.

Lulu Spencer (Emme Rylan) will also unsuccessfully try to make peace with Brook Lynn in Tuesday’s episode, so it’ll be an eventful day all around! CDL’s the place to be for exciting General Hospital spoilers, updates and news.