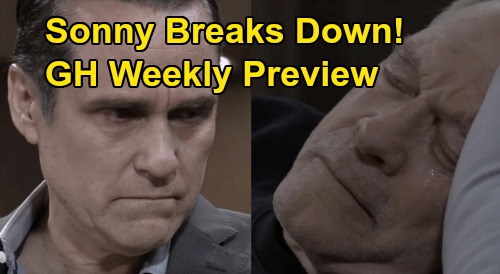 General Hospital (GH) spoilers tease that viewers in for a big week on the ABC soap. The new GH preview video for the week of March 30th promises some big confrontations and some heart-wrenching scenes. First off, Portia Robinson (Brooke Kerr) is shown in the promo telling Trina Robinson (Sydney Mikayla) that “this news isn’t good.” Trina looks stressed, insisting that her mother just tell her the news.

Chances are, this will have to do with the big reveal that Trina’s father, Marcus Taggert (Real Andrews), manufactured evidence to frame Cyrus Renault (Jeff Kober) back in the day. As GH viewers know, Jordan Ashford (Briana Nicole Henry) was forced to throw all of her fellow (and now deceased) DEA task force members under the bus and say that they framed Cyrus, even though she was also involved in the framing.

Of course, Jordan has to make this move in order to protect herself from going to prison. She doesn’t like it one bit, but it’s a necessary step to getting Cyrus out of prison and getting her son TJ Ashford (Tajh Bellow) back from Cryus’ clutches. But unfortunately, this means that Trina will have to learn that her father framed a man, and that should be tough for her to hear.

Next, the new GH preview promo shows a shocking scene, with Julian Jerome (William deVry) bursting into Neil Byrne’s (Joe Flanigan) office and attacking him. “You son of a…” Julian growls as he roughs up Neil. Interestingly, Britt Westbourne (Kelly Thiebaud) is right behind Julian as he rushes into Neil’s office, looking pretty intense. And Alexis Davis (Nancy Lee Gran) appears to have no idea what Julian’s problem is.

Chances are, this has something to do with the fact that Britt recently appeared to recognize Neil when they met at GH. She noted that he looked awfully familiar, so perhaps she’ll remember where she remembers Neil from, and that will spark some sort of rage in Julian. What could Neil’s deal be?

Meanwhile, on the new GH promo for the week of March 30 to April 3, Cyrus and Jordan will have another face-to-face meeting at Pentonville. Cyrus croons, “It’s great to have friends in high places” to Jordan, while Jordan fires back, “I want my son.”

Cyrus then reminds Jordan that he’s not out of prison yet. It looks like Cyrus is going to want to be safely on the outside before he lets TJ go free – that is, if he intends to do so at all.

Knowing Cyrus, he may issue some sort of warning that TJ will be in further danger if anything happens to him once he’s released from prison. Surely, things won’t be so simple for Jordan here, and she’s probably worried that Cyrus is going to go ahead and kill TJ no matter what. Jordan’s right to be worried, as Cyrus just can’t be trusted.

Finally, the GH promo preview deals with end-of-life issues for Mike Corbin (Max Gail). As GH viewers know, Mike recently fell and sprained his wrist, and in the promo, he’s shown laying in the hospital bed and appearing nearly catatonic. It looks like it could be nearing the end for Mike, and Sonny is shown standing beside Mike’s bed, looking down at him in tears.

Sonny will need all the support of his family at this time, which GH spoilers say that he’ll get. In the promo, Sonny tells Carly Corinthos (Laura Wright), “This is hell, I can’t do it.” Carly hugs him tenderly and tells him that he can do it. It looks like some truly heartbreaking scenes are coming up as Sonny finally has to face what he’s been in denial about for a long time.

This week looks great, so stay tuned! We’ll give you updates as more GH news comes in. Stick with the ABC soap and remember that CDL is your place for the latest General Hospital spoilers, news, and recaps.