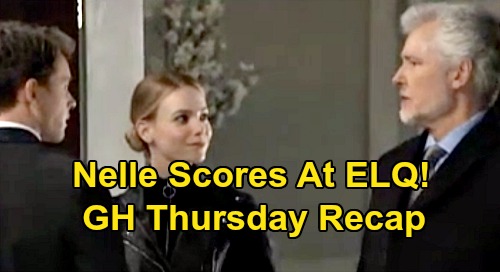 General Hospital (GH) spoilers recap for Thursday, January 16, reveal that Nelle Benson (Chloe Lanier) called in Martin Grey (Michael E. Knight) to the Quartermaine living room. Martin said that they had an injunction allowing Nelle to vote with her shares in ELQ matters until the probate over Oscar Nero Quartermaine’s (Garren Stitt) shares was settled. The ELQ lawyer agreed that it was on the up-and-up.

Michael offered to buy Nelle off, but she flatly refused and stated that she wasn’t going anywhere. Brook Lynn Quartermaine (Amanda Setton) then got in Nelle’s face and told her off, leaving Nelle calling for Martin to get her out of there. After Nelle was gone, Michael promised to find a way to rid the family of her for good.

Meanwhile, Julian Jerome (William deVry) went to Brad Cooper’s (Parry Shen) home. Brad was frazzled and the place was a mess, and Julian said that Brad was losing it and that if he’s not careful, then Sonny Corinthos (Maurice Benard) will put two and two together. Julian warned Brad to lay low and to let him know if Nelle gets in touch.

Alexis happened to walk in the hospital chapel ahead of her meeting and caught Julian praying. Julian revealed that he didn’t know if God was listening to him at this point, and she offered to listen before getting an urgent text from Ned Quartermaine (Wally Kurth). She then told a horrified Julian that Nelle was out of prison and causing trouble.

Next, at the Corinthos estate, Jason Morgan (Steve Burton) updated Carly Corinthos (Laura Wright) about the Nelle situation, and Sonny entered and had an announcement – he made a decision to enroll Mike Corbin (Max Gail) in the clinical study in New York and he wants to take Mike to Brooklyn first. Sonny then asked Jason to go with them. Jason agreed.

Soon, Gladys Corbin (Mel Harris) arrived after visiting with Mike, who she revealed wasn’t doing well today. She was happy to learn that Mike was going to get in the clinical trial and wanted to go, too, which Sonny nixed. Gladys asked to stay at the house one more night, which Sonny and Carly reluctantly agreed to.

Later, Jason called Sam, who was about to go into the Quartermaine mansion. He told her that he was headed to New York with Sonny and Mike for a while, but that they would get back to dealing with the Peter August (Wes Ramsey) situation soon. Sam then went into the mansion and got updates from Michael and the rest of the family about Nelle getting Oscar’s ELQ shares.

Over at Lulu Spencer’s (Emme Rylan) townhouse, Nikolas Cassadine (Marcus Coloma) arrived and got an earful from his sister. Lulu was peeved about Nikolas’ bodyguard lie to Charlotte

Cassadine (Scarlett Fernandez) and she pointed out that Charlotte could have been hurt when she jumped into the water to provoke her bodyguard. Nikolas was sorry, but Lulu was also mad about him staying away for three years.

Nikolas tried to explain his rationale for staying away, but Lulu didn’t really buy it. She was particularly disturbed that Nikolas didn’t seem sorry about how he handled the past three years, and she told him that she hopes that he comes to his senses and that she gets her real brother back. He left, frustrated.

Finally, Brad got another visitor – Nelle. Brad was shocked as Nelle just barged on in his place and made herself at home. She declared that she was going to stay there until she could find a place of her own, and that she had plenty of resources that she inherited from Shiloh. Nelle happily propped up her vision board with her goals for the future as Brad panicked.