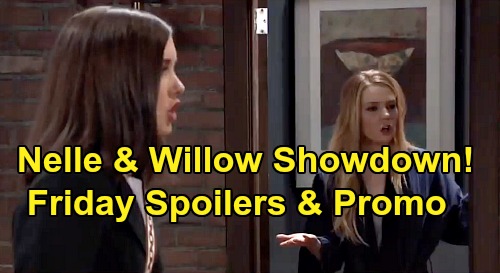 Nelle’s quite proud of her marriage to the late Shiloh Archer (Coby Ryan McLaughlin) and intends to take full advantage of the benefits. However, Nelle doesn’t currently have money or resources. She just barged in Brad Cooper’s (Parry Shen) place and announced that she’ll be staying there until her huge payday comes.

Brad will put up a fight on Friday, but he won’t be able to get rid of Nelle. She knows too much and it’s probably better to keep a close eye on her anyway. Unfortunately, Willow Tait (Katelyn MacMullen) will have a run-in with Nelle soon enough.

Willow may arrive to pick up “Wiley Cooper-Jones” (Erik and Theo Olson) since she’s his new nanny, but she won’t expect to see Nelle come around the corner in a robe.

Friday’s GH preview video shows Willow and Nelle angrily asking, “What is she doing here?” Brad will do his best to keep the peace, but Nelle and Willow’s rivalry has already been established. There’s no stopping this feud now!

Other General Hospital spoilers say Michael Corinthos (Chad Duell) will fill Sasha Gilmore (Sofia Mattsson) in on all the Nelle drama. He’ll insist Nelle’s dangerous and argue that Sasha needs to move in with him. Sasha will look floored by the suggestion. She wasn’t planning on taking that step with Michael just yet, but down-the-road GH spoilers hint that she’ll be talked into it.

Over with Trina Robinson (Sydney Mikayla), she’ll roll her eyes at Cameron Webber (William Lipton) and wonder who he thinks he’s kidding. Cam will deny having feelings for Josslyn Jacks (Eden McCoy), but Trina will think he’s being a typical teenage boy. She’ll want Cameron to stop with all the games and denials.

Next, Carly Corinthos (Laura Wright) will be her usual nosy self. She’ll hound Josslyn after she realizes something went down with Dev Cerci (Ashton Arbab), but she may get the wrong idea at first.

It looks like Carly will initially think Dev made a move, but Joss will contend that’s not the case. The pieces will eventually click into place for Carly, who’ll realize Josslyn hit on Dev instead.

Joss will complain about her mom’s meddling, but Carly will undoubtedly want to know more. Once Josslyn shares Dev’s reason for pushing her away, Carly may think it’s a logical one.

Dev suggested that the Corinthos family had been good to him and he didn’t want to be disrespectful. He’s wary of crossing lines and making things complicated, but Joss feels like that was his way of letting her down gently.

Nevertheless, we’ve already seen flying sparks on Dev’s end – like when he playfully held Joss’ journal above her head and caused a charged moment. Dev is definitely interested, but this romance could take a while to play out.

In the meantime, Sonny Corinthos’ (Maurice Benard) past will come back to haunt him. He’ll be furious when he spots Marcus Taggert (Real Andrews) in town again.

Sonny will get in Taggert’s face on Friday and wonder “why the hell” he’s back. These two have a rough history to say the least, but it appears Marcus has an interesting history with Jordan as well. Marcus is apparently the one Jordan contacted about the Bob Massicotte investigation.