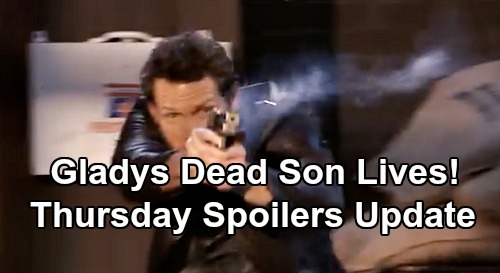 General Hospital (GH) spoilers update for Thursday, January 30, teases that some wild moments are on the way. Before we dive in, we should note that GH finally seems to be moving ahead with new episodes, but impeachment trial coverage may affect whether it airs in your area. If you miss Thursday’s show, you can head on over to ABC.com and watch the latest episode.

As for what’s coming up, there’ll be plenty of action thanks to the shocking shootouts that just went down. General Hospital spoilers say Jason Morgan (Steve Burton) will take charge at the diner in Brooklyn. When the shooter refuses to listen, Jason will take him down right then and there!

Poor Mike Corbin (Max Gail) will be a mess thanks to the chaos. He’ll just want to go home and get away from the commotion of it all. Jason and Sonny Corinthos (Maurice Benard) will face some tricky questions from the cops, but they’ll be allowed to leave for now.

Sonny may hear from the cops again later, but his priority will be getting back to Port Charles and checking on the rest of the family.

That’s because two other shootouts just occurred there – and Sonny will get updates on them. He’ll realize he’s needed in PC as soon as possible along with Jason, so Mike will have to skip the study. It’ll be tough for Sonny to give up Mike’s spot in the trial, but it’s not like Mike’s in any shape to undergo it anyway.

Other General Hospital spoilers say Carly Corinthos (Laura Wright) will be in grave danger until a mysterious hero comes along. A man will save Carly’s life at the warehouse, but she’ll be surprised to learn he doesn’t work for Sonny.

Jordan Ashford (Briana Nicole Henry) will weigh after she arrives to investigate. She’ll suggest that maybe this guy worked for the enemy and switched his allegiance for some reason.

When Gladys Corbin (Bonnie Burroughs) appears, she’ll find herself facing Jordan’s gun for a moment. However, Gladys will advise Jordan to stand down. She’ll insist she’s just an innocent bystander, so Jordan will lower her weapon.

Soon after, Gladys will notice the mystery man and realize it’s Brando Corbin (Johnny Wactor) – the “dead” son she’s talked about quite often.

On the docks, Dustin Phillips (Mark Lawson) will scare away the shooter before any more damage can be done. Josslyn Jacks (Eden McCoy) will be incredibly grateful that Dustin showed up just in time.

Laura Collins (Genie Francis) will be rushed to GH, where she’ll ultimately need surgery to remove the bullet. Hamilton Finn (Michael Easton) will be hopeful about Laura’s recovery, so that’s excellent news.

Meanwhile, Michael Corinthos (Chad Duell) will face a grilling session regarding the latest attack. He was apparently the target, so that’ll put him on the hotseat.

Harrison Chase’s (Josh Swickard) questions will rile Sasha Gilmore (Sofia Mattsson), so she’ll argue that Chase is supposed to be Michael’s pal. Sasha won’t appreciate all the harassment, but Michael will think Chase is just doing his job.

At Crimson, Nina Reeves (Cynthia Watros) will get an apology from Jasper “Jax” Jacks (Ingo Rademacher). He’ll be sorry for that inappropriate kiss since he’s her boss. Of course, Nina won’t think it was all that inappropriate.

Nina marches to the beat of her own drum, so she’s never viewed Jax as her boss anyway. Nina’s stance on the situation will please Jax and leave their chemistry crackling!

Once Ava Jerome (Maura West) finds out Valentin Cassadine’s (James Patrick Stuart) out on bail, she’ll give him a piece of her mind. Valentin won’t be shy about firing back, so expect a heated argument. As for Nina, Valentin will let her know that he’s practically a free man!

Jax will head over to GH and check on Josslyn, who’ll reassure her dad that she wasn’t hurt. Joss will also introduce Dustin to her father. She’ll fill Jax in on Dustin being her teacher and her hero, so Josslyn definitely thinks highly of Mr. Phillips now.

Over with Nikolas Cassadine (Marcus Coloma), he’ll have to deal with some drama thanks to his poor choices. Kevin Collins (Jon Lindstrom) will lash out over Nik’s decision to deceive his loved ones.

Finn will bring Nikolas up to speed on Laura’s condition before insisting Violet Barnes (Jophielle Love) would like her mother back. He’ll be upset about Nikolas driving Hayden Barnes (Rebecca Budig) out of town.

Finn will point out that Nik needs to come clean with Elizabeth Baldwin (Rebecca Herbst). That’s something Nik already intended to do, but he’ll wonder if it’s the right time thanks to all the shootout mayhem.