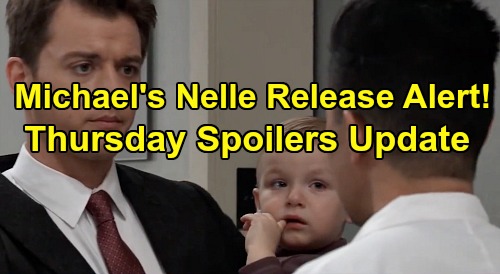 General Hospital (GH) spoilers update for Thursday, January 9, teases that Sonny Corinthos (Maurice Benard) will be committed to helping his father. Carly Corinthos (Laura Wright) will still feel like Sonny’s fighting a battle he just can’t win. She’d rather see Sonny just enjoy the time he has left with Mike Corbin (Max Gail) instead of wasting it on studies and trials that won’t work.

However, Sonny will insist this particular study seems promising. It focuses on magnetic fields and could provide a real breakthrough in Alzheimer’s research. Sonny will insist they could be taking the first steps toward a cure, so he’ll want to pull some strings and get Mike signed up.

General Hospital spoilers say Sonny will hit the road next week, so that may involve a road trip with Mike. The study is in New York, so it’s obviously in an area within driving distance. It sounds like Carly will just have to accept Sonny’s decision and let him handle things in his own way.

Speaking of handling things, Jason Morgan (Steve Burton) and Sam McCall (Kelly Monaco) are counting on Robert Scorpio (Tristan Rogers) to do that. They need assistance from someone who can go over Sam’s parole officer’s head.

Sam and Jason took a gamble by arriving at the police station together to make their pitch. Robert will listen to their proposal on Thursday and agree to make a deal.

Sam’s new year should take a pleasant turn, so that’s certainly great news. As for Michael Corinthos (Chad Duell), he’ll have some not-so-great news to pass along.

Michael will surprise Brad Cooper (Parry Shen) at GH, so Brad will wonder what the trouble is. After Michael confirms that he’s not really OK, he’ll provide updates on whatever’s bothering him.

This might have something to do with Nelle Benson’s (Chloe Lanier) freedom. She’ll indeed be a free woman soon, so Michael will be unsettled whenever he hears about that.

Next, Anna Devane (Finola Hughes) will hope to get the truth from Peter August (Wes Ramsey). He’ll seem a bit taken aback as Anna starts her latest grilling session.

Peter may be asked about his connection to a DVX front company called Eurotech. Anna found out Peter and the gunman were there at the same time, so that’s given her a reason to be suspicious.

Even so, Anna wants to believe Peter’s as kind as he appears. Part of her may buy whatever story he sells, but another part of her should have nagging doubts about his character.

After Finn rips into him, Jax may come clean about Nik’s ruse and how he convinced Hayden Barnes (Rebecca Budig) to leave town.

Naturally, Finn will be enraged that Jax let something like this happen. His daughter is the one paying the price! General Hospital spoilers say Finn will shoot Jax a dirty look, but he’ll get reassurance in return.

Jax will make it clear that he intends to do everything in his power to find Hayden and bring her home. He’ll definitely hope he can reunite Hayden and Violet Barnes (Jophielle Love) soon.

At Charlie’s Pub, Ava Jerome (Maura West) will have an announcement to make. She’ll approach Julian Jerome (William deVry) and insist she’s about to have the sweetest revenge. Ava will tell Julian all about her agreement with Nikolas – and the fact that he’s her new husband.

Julian will undoubtedly warn Ava that Nikolas is dark and destructive. He won’t want his sister getting hurt, but Ava will think she can take care of herself. She may argue that it’s Nik who needs to watch his back! We’ll keep you posted as other GH details emerge. Stay tuned to the ABC soap and don’t forget to check CDL often for the latest General Hospital spoilers, updates and news.