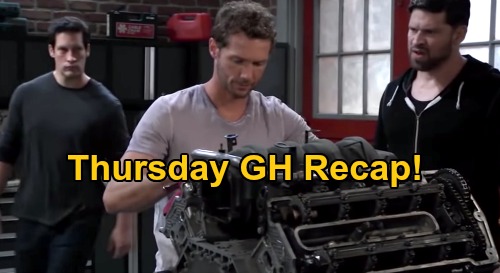 Alex offered Anna congratulations on being a grandmother again, and she said that she wanted to stop running. Alex asked Anna to help her to come home, and to start by meeting her in Berlin.

Hamilton Finn (Michael Easton) overheard part of the conversation, and then Anna filled in Finn on what Alex had said. Anna said that she thought this was probably about Peter August (Wes Ramsey), and that she needed to go to Berlin to find out what Alex was planning. Finn got upset, wanting Anna not to play into Alex’s hand.

But Anna said that she had no choice, and that she had to protect her family. Finn was miffed, and he grumped that Anna should tell him when she’s leaving because Violet Finn (Jophielle Love) will want to say goodbye. Finn stormed off, leaving Anna upset.

At the hospital, Peter rushed into Maxie Jones’ (Kirsten Storms) exam room just before her ultrasound. Peter promised that this would be the last time that work made him late to an appointment, but Maxie wasn’t concerned.

Later, the doctor arrived, and Peter and Maxie saw the baby on the monitor and listened to the heartbeat. Peter was truly excited and touched.

Olivia thought that Robert was fearful of going to Holly’s memorial, but Robert balked. Olivia persisted, saying that it was ok to be afraid and that she was afraid to go see Dante Falconeri (Dominick Zamprogna), too.

Olivia worried that maybe Ned was right and that she’d get her heart broken. Robert urged Olivia so stay positive, and Olivia said that she’d go to Holly’s memorial with Robert.

Jason and Spinelli learned about Neil Byrne’s (Joe Flanigan) death, then they took off. Sam and Alexis talked to distract Alexis from Neil’s death, and Sam revealed how she made a deal with Valentin Cassadine (James Patrick Stuart) to get a new parole officer.

Soon, Alexis got a text from the medical examiner saying that the autopsy report and cause of death for Neil was ready. Alexis headed off to GH to get the results, and she urged Sam to live her life with Jason and the kids.

At Turning Woods, Cyrus Renault (Jeff Kober) sat with a resident putting a puzzle together when his henchman came in. Cyrus instructed his henchman to pay their “friend” a visit and see if he needed their help.

The henchman left and Sonny Corinthos (Maurice Benard) entered, upset to see Cyrus. Cyrus tried to ask about Mike Corbin (Max Gail), but Sonny snapped that Cyrus didn’t get to ask about his father.

Sonny said that Cyrus being at Turning Woods was a potential breach of their truce, but Cyrus said that he volunteered there. Suddenly, Brick (Stephen A. Smith) showed up and had words with Cyrus. Brick explained that he was a private security consultant, and that he knew a lot about Cyrus and that none of it was good.

Sonny thought that Turning Woods didn’t need Cyrus’ help, and Cyrus said that as it turned out he had a lot on his plate. Sonny told Brick that Cyrus was now Chairman of the Board at GH.

Cyrus said that his people had done a review of GH and found a lot of “institutional rot” and so it was time for a revamp. Cyrus then asked about Jason, which unnerved Sonny.

After Cyrus left, Brick and Sonny thought that Cyrus wanting control of GH wasn’t good. Sonny said that he was going to let Cyrus get set up and see where he was weak. Brick then offered his friendship to Sonny, asking about the family and Mike in particular.

At Brando Corbin’s (Johnny Wactor) garage, a police officer arrived to ask Brando some questions about Jason’s motorbike accident. Brando said that he had checked with the manufacturer about defects on that part, but there were none, and that he had installed the part properly.

Suddenly, Cyrus’ henchman walked in and the police officer left. The henchman said that Cyrus asked him to come see if Brando needed some help making a legal issue go away. Brando declined, and the henchman left.

A bit later, Spinelli entered with a phony car problem to get Brando out of the building. Brando and Spinelli left to go take a look at Spinelli’s car down the road, and Jason snuck into the building and planted a surveillance camera in the garage.

In the park, Jason and Spinelli regrouped and watched the surveillance footage on a laptop. They were soon joined by Sam. In another area of the park, Cyrus met up with his henchman, who reported that Brando didn’t accept their offer to help.

“Then it’s time for next steps,” Cyrus said. Cyrus called somebody, then he flashed back to when he visited Brando at the garage shortly before Jason’s motorbike accident.

Cyrus remembered asking Brando to become his chauffeur. In the flashback, Brando turned down Cyrus flat, and while this was going on inside, one of Cyrus’ guys tampered with Jason’s bike outside.

Back at the hospital, Sonny arrived and asked nurse Deanna Sirtis (Dioni Michelle Collins) to see Monica Quartermaine (Leslie Charleson) immediately. Deanna told Sonny that Monica no longer worked there, and neither did Bobbie Jones (Jacklyn Zeman). Deanna said that Cyrus fired them both.

Back at the Metro Court, Maxie and Peter met up with Anna. Maxie and Peter showed Anna the ultrasound image, and Anna was thrilled. Peter said that the baby was lucky to have two magnificent grandmothers, and Anna looked unnerved.

That was a great episode of General Hospital, and you’ll definitely want to tune in tomorrow! Keep CDL handy so you don’t miss any of the latest daily episode recaps, hot news, or sizzling spoilers. We’ve got you covered!