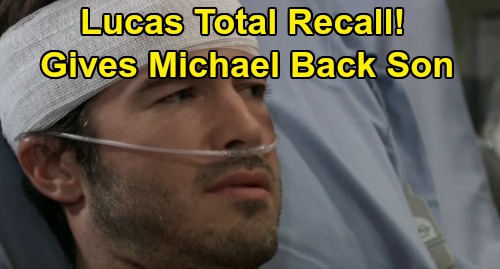 General Hospital (GH) spoilers tease that Lucas Jones (Ryan Carnes) may eventually face a difficult decision. GH fans know Lucas didn’t remember much when he woke up from his coma – at least he thought he didn’t. However, Lucas had a strange look on his face when he spotted Michael Corinthos (Chad Duell) holding “Wiley Cooper-Jones” (Erik and Theo Olson).

Michael is “Wiley’s” loving godfather, so he holds the kid all the time. Lucas is used to seeing them together, but it was difficult this time. Something about the sight of “Wiley” in Michael’s arms brought a peculiar reaction. Although Lucas can’t pinpoint exactly what’s going on here, the clues are bound to start coming together.

Lucas ultimately had a memory flash of what transpired just before the crash. He recalled how Brad Cooper (Parry Shen) was going to tell him something. In the episode airing February 7, Lucas confronts Brad about this memory flash. He demands to know what Brad was going to confess, but he’s not going to get answers just yet.

General Hospital spoilers say Lucas will keep putting this puzzle together. Nelle Benson Archer (Chloe Lanier) has a sneaky plan in motion, but it hasn’t had enough time to play out. She’ll continue to stir up trouble as Lucas struggles to remember everything about that night. Since Brad is a proven liar, Lucas may feel like there’s more to the story – especially as those memory flashes become longer and clearer.

There’s a good chance we’re building toward total recall for Lucas at some point. Will Lucas be the one to blow this secret up? Since Lucas adores “Wiley” and has been serving as his devoted dad, he’d perhaps be the most heartbreaking candidate to reveal the truth. Lucas has a pretty strong moral code, so he’d probably come clean right away. He’s not a snake like perpetually secretive Brad!

While Lucas recovers, Willow Tait (Katelyn MacMullen) will resume her duties as “Wiley’s” nanny. However, Michael may pitch in more as well. He always struggles to stay away! Bottom line, there should be plenty more opportunities for Lucas to watch “Wiley” with Michael. Will something finally click that last puzzle piece in place?

Of course, Nelle could easily kidnap “Wiley” since she’s determined to raise her son. If “Wiley” disappears and Nelle’s the top suspect, you can bet that total recall we mentioned will hit hard.

No matter how this shakes out, Lucas will inevitably remember Brad’s confession about “Wiley” being Michael and Nelle’s son. His jogged memory could leave him in the unfortunate position of telling Michael the painful truth.