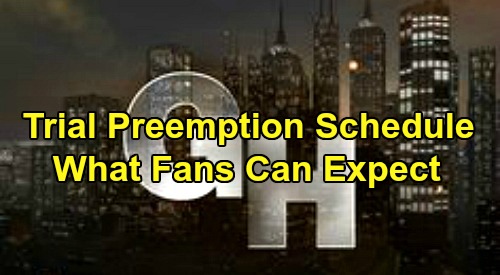 General Hospital (GH) spoilers reveal that the Trump impeachment trial will affect the show’s schedule. ABC has daytime news coverage planned, which means GH should be preempted in many or possibly all areas. General Hospital will make a firm announcement on that eventually, but for now it’s a good idea to just go ahead and prepare for schedule interruptions.

Of course, the real question is: Will GH post the episodes online or wait to air them at a later date? This trial’s set to go on for weeks, so getting too far behind could be risky. It appears Days of Our Lives is aware of that. That’s why they’re apparently choosing to post their episodes on NBC.com and the NBC app. They’re letting fans stay up to speed and just rolling right along.

However, General Hospital may or may not follow that path. It’s possible they’ll be able to air portions of the show during breaks. In that case, GH might air what they can and then post the full episodes online.

Then again, GH might put the episodes on their website regardless. It all depends on how they want to handle this tricky situation.

If General Hospital chooses to push the episodes back, Valentine’s Day could come much later in Port Charles. That wouldn’t be ideal, but we can’t ignore the possibility. GH viewers are definitely looking forward to some confirmation on this one way or the other.

As for what’s ahead in Port Charles, General Hospital spoilers say Nelle Benson Archer (Chloe Lanier) will continue to wreak havoc. Michael Corinthos (Chad Duell) thinks he’s got a plan to handle Nelle, but she’s one crafty character. There’ll be some crazy drama thanks to Nelle in the coming episodes.

Sonny Corinthos’ (Maurice Benard) enemy will also cause some dangerous mayhem. A shocking shootout is brewing, so that’s sure to bring some exciting moments. Laura Webber (Genie Francis) will seemingly get shot after chaos erupts.

With so much action in store, GH fans can only hope they don’t have to wait too long to see it! We’ll give you updates as other news comes in. Stay tuned to the ABC soap and don’t forget to check CDL often for the latest General Hospital spoilers, updates and news.