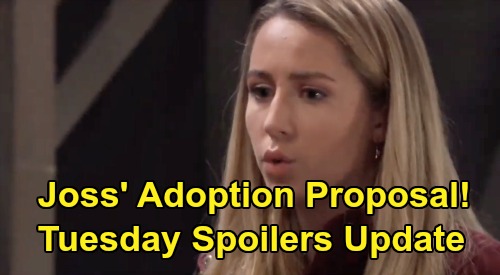 General Hospital (GH) spoilers update for Tuesday, January 21, teases that Sonny Corinthos (Maurice Benard) will have a warning for Jason Morgan (Steve Burton). They’ll mull over a strategy for dealing with their current enemy, but they can’t mess this up. It’s crucial for everything to go according to plan.

Sonny will make that crystal clear to Jason and insist there can’t be an incident. He’ll be adamant about this scheme working, but things are going to blow up later this week. Gunfire will erupt – and quite a few Port Charles residents will get stuck in the violent drama.

Although Carly would love to have a brawl right there in the Metro Court, she may hold herself back for now. As for Willow Tait (Katelyn MacMullen), she’ll remain uncomfortable over Nelle’s presence in Brad Cooper’s (Parry Shen) life. Willow can see that Nelle’s a total psycho, so she doesn’t want her anywhere near “Wiley Cooper-Jones” (Erik and Theo Olson).

General Hospital spoilers say Willow will complain to Sasha Gilmore (Sofia Mattsson) on Tuesday. Willow won’t see how she can be fine with Brad raising her “son” on his own. However, “Wiley” is actually Nelle and Michael’s biological child. You can bet that shocker’s going to blow up down the road, but Willow may be tempted to reclaim the kid for now.

Josslyn Jacks (Eden McCoy) will certainly think that’s an option worth considering. Down by the docks, Joss will push Michael to talk Willow into it. She’ll think Michael should have Willow revoke the adoption and take back “Wiley.” Josslyn knows that Nelle’s a dangerous nutjob, so she’ll definitely think something needs to be done.

Michael may not believe it’s come to that just yet, but he’ll remain concerned about Nelle and her constant manipulation. Anything can happen now that Nelle’s out of the slammer! Over with Ava Jerome (Maura West), she’ll finally convince Nikolas Cassadine (Marcus Coloma) to sign the post-nuptial agreement. Nik will promise to put pen to paper, but there’ll be a catch.

After Nikolas spells out one last condition, Ava will go along with it. They’ll be on the same page about their deal, but someone may get stabbed in the back eventually. At Crimson, Lulu Spencer (Emme Rylan) will show up to get Charlotte Cassadine (Scarlett Fernandez). She’ll be puzzled when she spots pieces of Sasha’s photo scattered around.

Lulu will try to pry some answers out of Charlotte, who may admit she cut up the pic in anger. Charlotte will likely argue that Sasha’s responsible for all the destruction. She may feel like she’d still be a happy family with Nina Reeves (Cynthia Watros) and Valentin Cassadine (James Patrick Stuart) if Sasha hadn’t messed everything up.

Lulu will try to steer Charlotte away from her rage toward Sasha, but the kid’s obviously got some issues. General Hospital spoilers say another great episode’s on the way, so don’t miss all the action. We’ll give you updates as other GH news comes in. Stay tuned to the ABC soap and don’t forget to check CDL often for the latest General Hospital spoilers, updates and news.