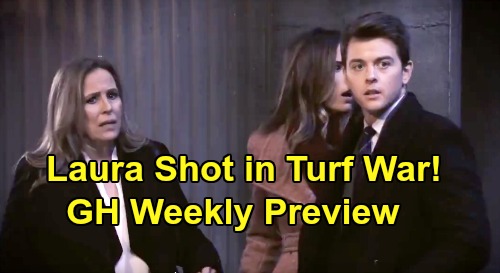 General Hospital (GH) spoilers tease that the action will really be picking up this week. The new GH preview promo for the week of January 20 is jam-packed full of exciting moments and big drama. It definitely looks like a week that you won’t want to miss!

We should note that the promo covers a lot, so we’ll deal with one big aspect of it in this post, then cover some of the other exciting details in a separate post. For now, let’s talk about the big turf war that’s brewing in Port Charles and its terrifying consequences.

The promo shows Sonny Corinthos (Maurice Benard) all serious and brooding about the recent attack on one of his coffee trucks. Both he and Jordan Ashford (Briana Nicole Henry) recognized the hijacking as a possible warning sign of more problems to come.

In the promo, Sonny tells a worried Carly Corinthos (Laura Wright) that he has to find out who’s after their family and why.

And Jordan is shown telling Jason Morgan (Steve Burton) that if there’s a turf war brewing in Port Charles, then she needs to know about it. Of course, Jason and Sonny will remain tight-lipped with the police as they’ve always been, and it looks like that’s going to lead to some big problems this week.

First off, it appears that Sonny and Jason will hear more rumblings of problems, with someone clearly after part of Sonny’s Port Charles territory. That will lead others in the family to worry about their safety.

In fact, Michael Corinthos (Chad Duell) is shown attempting to break up with Sasha Gilmore (Sofia Mattsson) on the grounds that he needs to protect her from his father’s enemies.

Well, as you can imagine, that’s not going to sit well with Sasha, and in the promo she angrily confronts him, saying, “You think that I could just walk away and get on with my life?” Michael persists, though, and insists that he’s trying to protect you. And when Sasha asks why, he blurts out, “Because I love you!”

Of course, Sasha’s a pretty persistent person, so it’s doubtful that she’s just going to walk away from Michael or let him walk away from her. And in fact, they’re shown later in the promo as things seem to be heating up near Sonny’s place of business.

Sasha, Michael, and Harrison Chase (Josh Swickard) are shown talking, when suddenly they hear something that alarms them all.

And that could be the major shootout that’s also shown in the promo. The promo moves pretty fast, but it appears that Sonny, Jason, Mike Corbin (Max Gail), Carly, Laura Collins (Genie Francis), Gladys Corbin (Mel Harris), and Josslyn Jacks (Eden McCoy) will all be in the same general area when someone opens fire. It’s likely someone trying to send a message to Sonny about his territory, but tragedy could well occur.

Jason goes Stone Cold and is seen shooting it out with the attackers and it appears that Laura gets shot – she looks to be hit by a bullet as she’s shown down and apparently unconscious as Michael calls out her name.

At any rate, it looks like the shootout will cause some big problems for Sonny and others this week. Of course, after such a blatant attack on his family, Sonny will probably retaliate. And then there’s the issue of whether Laura or others will be seriously hurt in the attack, which is pretty terrifying in its own right!

It looks like some big action is coming our way this week, so stay tuned! We’ll give you updates as GH news comes in. Stick with the ABC soap and don’t forget to check CDL often for the latest General Hospital spoilers, updates, and news.