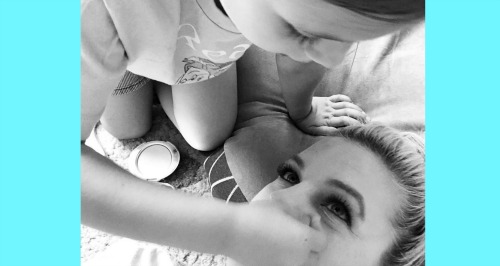 General Hospital (GH) spoilers reveal that one ABC soap star had some fun news to pass along. GH viewers know Kirsten Storms as Maxie Jones in Port Charles, but she’s also a devoted mom in real life. Storms recently put up an Instagram post, which talked about an adorable game she plays with her daughter, Harper Rose Barash.

Of course, Harper’s father is Brandon Barash, who used to play GH’s Johnny Zacchara and now plays Stefan DiMera on Days of Our Lives. However, this Instagram post was all about those precious moments during mother-daughter time! Like many little girls out there, Harper’s a big fan of getting all dolled up. She wants to make sure Storms has just the right look, so she enjoys an intriguing game involving makeup.

Storms was happy to share the details through a story and a sweet pic of them together. Her post said, “’Makeup Counter’ – a new game where Harper does my makeup and then I put money in her piggy bank to pay for the service. She also ‘gave’ me an @lolsurprise doll for staying very still while she was working.”

It’s lovely that Storms is such a doting mom. Not everyone is so involved and engaging with the kiddos, so it’s nice that Storms gets on board for projects like this. Harper undoubtedly loves having her mom play along. Storms received many supportive comments on Instagram as well as Twitter, where she shared a link to the post.

One fan said, “She is adorable! You and Brandon have done a great job raising Harper!!” “You and Brandon need to write a book about co-parenting!” another fan insisted. Plenty of other General Hospital chimed in about how the game was “the cutest” and assured Storms that she’s a fantastic mother.

As for what’s ahead in Port Charles, General Hospital spoilers say some exciting drama’s in the works. Drew Cain’s (Billy Miller) story will take center stage as Billy Miller’s exit rapidly approaches, but there’ll definitely be some Maxie and Peter August (Wes Ramsey) scenes along the way.

It sounds like some good stuff’s brewing, so stay tuned. We’ll give you updates as other GH details emerge. Stick with the ABC soap and don’t forget to check CDL often for the latest General Hospital spoilers, updates and news.

“Makeup Counter” – a new game where Harper does my makeup and then I put money in her piggy bank to pay for the service. She also “gave” me an @lolsurprise doll for staying very still while she was working. ♥️