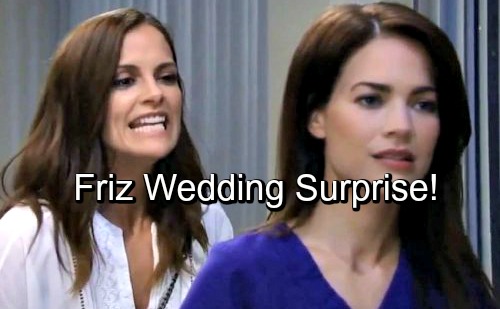 Who was it and when will he or she inevitably arrive in town? General Hospital will have to answer those questions soon enough! In the meantime, we can speculate on the potential clicker. There’s always a chance that Hayden Barnes (Rebecca Budig) could pop up again. It’d be easy for her to get involved in the drama.

The timing would be perfect since Anna (Finola Hughes) and Finn (Michael Easton) are on solid ground. They recently had a chat about how right everything feels. Finn and Anna are finally taking a moment to catch their breath. Of course, they won’t get a break from the chaos for long! More mayhem is looming, so it’d be great if it could come in the form of Hayden.

GH viewers will recall that Hayden lied about her miscarriage, so she should have a kid by now. If she suddenly showed up with her little one, it’d throw Finn for a loop. This could derail all his plans and force him to question what he truly wants.

Perhaps Hayden’s comeback is already in motion. Could she have tracked down her half-sister’s family before Franco started his search? Liz has no idea where Hayden is, but Sarah just might! It’s possible Sarah’s grown closer to Hayden and is keeping her whereabouts a secret.

It’s even possible Hayden encountered Sarah by accident. She might’ve moved to the area and sought a job at the same hospital Sarah works at. Sarah is living out in California, which would line up with Hayden’s goal of putting Port Charles behind her. That’s as far away as she could get without leaving the country.

Then again, Hayden may have met Sarah through her baby. Since Sarah’s a pediatric cardiologist, she might’ve cared for Finn and Hayden’s ill infant. Blood tests may have led to the Sarah and Hayden’s connection as half-sisters.

There are plenty of ways for General Hospital to bring this all together. Sarah indicated that she’s too busy to attend Franco and Liz’s nuptials, but you never know when her schedule might clear. Regardless, Hayden could make an appearance along with her son or daughter. That would definitely bring a wedding surprise!