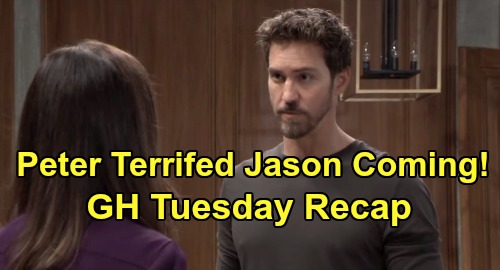 General Hospital (GH) spoilers recap for Tuesday, February 4, reveal that Sonny Corinthos (Maurice Benard) watched as one of his guys beat on the gunman from the warehouse shooting. The gunman wouldn’t talk, and Sonny yelled at him before more beating ensued.

Meanwhile, Sam McCall (Kelly Monaco) enjoyed some time with Scout Cain (Emma Ramacieri) at Kelly’s when Hamilton Finn (Michael Easton) walked in. Sam and Finn talked while Scout listened to music on her headphones, and the topic of danger came up, as Sam and Scout were flanked by a bodyguard. Finn remarked that he’s got Violet Barnes (Jophielle Love) now and that he has to be careful.

That led to a conversation about Peter August (Wes Ramsey) and his connection to Drew Cain’s (Billy Miller) disappearance and the attempts on Andre Maddox (Anthony Washington) and Franco Baldwin’s (Roger Howarth) lives. Finn wondered whether she and Jason Morgan (Steve Burton) had any proof about Peter’s connection to it all, and Sam said they were working on it.

The conversation then turned a bit contentious, with Sam asking if Anna Devane (Finola Hughes) has said anything about Peter and his possible involvement with various nefarious deeds, but Finn lied and said that Anna didn’t tell him much about such things. Sam cautioned Finn about Violet’s safety where Peter is concerned, and Peter threw it right back on her and mentioned Jason and his kids.

Next, at the Corinthos estate, Sasha Gilmore (Sofia Mattsson) spoke briefly with Jasper “Jax” Jacks (Ingo Rademacher), who warned her about the dangers of being with Michael Corinthos (Chad Duell). Later, Jax wanted to talk with Carly about Josslyn Jacks’ (Eden McCoy) safety, but Carly wasn’t in the mood to hear all of Jax’s concerns about what could happen to Josslyn. Jax asked Carly to leave Sonny while she still can, which Sonny overheard as he walked in.

Sonny and Jax then argued, with Jax grumping about how Sonny was going to deal with the whole Brando Corbin (Johnny Wactor) situation. Jax even suggested that Sonny turn himself in to the authorities and go into witness protection, which Sonny thought was laughable. Jax left, and Carly and Sonny embraced, both worried about everything that’s going on.

At the Quartermaine mansion, Ned Quartermaine (Wally Kurth) and Tracy Quartermaine (Jane Elliot) were both horrified to find Nelle Benson Archer (Chloe Lanier) in the living room enjoying breakfast. Ned tried to get rid of Nelle, explaining that she had no right to be there. After some bickering, Michael and Sasha arrived and Michael explained that he had invited Nelle to move into the mansion and that Monica Quartermaine (Leslie Charleson) had agreed.

Ned and Tracy then talked privately, with Ned finally agreeing with Tracy that it was time for a leadership change in the family and in the company. Tracy was pleased as punch and said that she could now go back to Amsterdam knowing that ELQ was going to be ok. Meanwhile, Michael informed a distraught Nelle that she was going to stay in the boathouse, while Sasha smiled in the background.

Next, at Anna’s house, she and Peter played superhero games with Violet. Violet “saved” Anna from Peter, who played the bad guy. Afterwards, Peter and Anna had an emotional talk. Peter thanked his mother for not exposing his connection to the OR gunman, and Anna revealed that she removed the incriminating records from the police file. Peter was touched and grateful, but he noted that Jason remains a threat.

Anna insisted that she’d handle Jason, and that he’d have to go through her to get to Peter. This touched Peter, but he told Anna to let him go if need be, and that he was going to be the son that she deserves to have. Anna said that she’d never surrender him again. Both Anna and Peter were in tears and holding hands as they seemed to silently acknowledge Peter’s misdeeds. Later, Finn returned home to find Peter alone with Violet in the living room, playing happily.

Finally, Jason headed to the holding area where Sonny’s guy was roughing up the warehouse gunman when he heard a shot. He peered around the corner and saw Sonny’s guy on the ground, shot in the chest and overpowered by the gunman. Jason and the gunman traded shots until Jason shot the guy. As the guy lay dying, Jason asked him who he was working for, and the guy said, “Cyrus Renault.” Jason looked stunned.