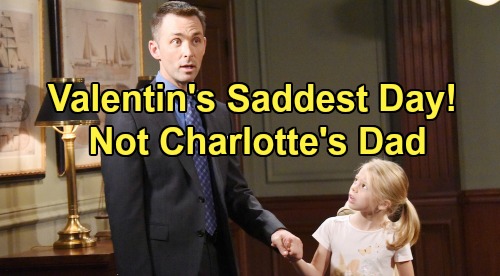 General Hospital (GH) spoilers tease that a DNA test could change Valentin Cassadine’s (James Patrick Stuart) world forever. Nikolas Cassadine (Marcus Coloma) is insisting on this next step to prove Valentin isn’t a true Cassadine. He argues that Valentin is Helena Cassadine’s (Constance Towers) son, so this DNA test may back up Nik’s claims.

However, this DNA test could lead to far worse trouble. General Hospital spoilers say Valentin’s set to get some crushing news soon, which will lead to a big announcement. His life will later head into a downward spiral – one that’ll bring darkness and destruction.

If Valentin isn’t a true Cassadine and Nikolas wins the current battle, that wouldn’t be the end of the world. You could argue that it’d be crushing, but it wouldn’t really be so bad. Valentin’s a resourceful guy. Just look at what he’s already got cooking with Martin Gray (Michael E. Knight).

Valentin can easily get more money and score a swanky new mansion or castle. In reality, whatever Nikolas takes can be replaced. GH fans know Valentin could overcome a setback like that.

Perhaps the truly crushing blow that’ll come from all this involves Charlotte Cassadine (Scarlett Fernandez). Will this DNA test somehow lead Valentin to the conclusion that Charlotte isn’t really his daughter? Something might come up that proves it’s just not possible.

If that’s the crushing news Valentin receives, what will his big announcement be? You can bet Valentin wouldn’t want a secret like this getting out. Valentin may become even more determined to score full custody and get as far away from Lulu Spencer (Emme Rylan) as possible.

Valentin might announce plans to start a new life with Charlotte after his own predicted victory in court.

That brings us back to the horrific turn Valentin’s life is about to take. The only thing that would truly plunge Valentin into darkness is losing his daughter – particularly if she’s not his daughter at all.

It’s one thing to lose custody, but what if Charlotte doesn’t even belong to Valentin? He’s going to be a total train wreck and will inevitably go off the rails.