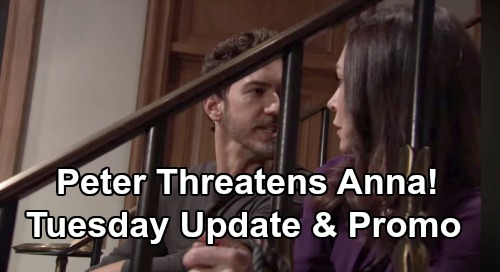 General Hospital (GH) spoilers update for Tuesday, February 4, teases that Carly Corinthos (Laura Wright) will hit the roof. She’ll be furious when Jasper “Jax” Jacks (Ingo Rademacher) makes a suggestion – or perhaps a demand – regarding Josslyn Jacks (Eden McCoy). Jax will be fed up with all this mob danger, so he’ll most likely insist on moving to Australia with Joss.

Of course, Carly won’t stand for that. It won’t be long until Joss is grown and out of the house, so Carly won’t want to waste precious time apart. She’ll yell that she refuses to be separated from Josslyn indefinitely. Jax will think their daughter’s safety has to come first, but Carly will be confident that Sonny can regain control.

Sonny will soon take steps toward that goal. He’ll have a meeting with the enemy targeting him later this week – and it’s a Pentonville inmate named Cyrus Renault (Jeff Kober). However, it appears Cyrus might send someone to speak with Sonny beforehand.

Tuesday’s preview clip shows Sonny shouting about something being a problem for him. His issue may be with the peril Cyrus brought to his family. Naturally, Sonny may also have an issue with a middleman.

If Cyrus wants to talk, they’ll have to do it face to face. Sonny and Cyrus’ upcoming meeting is sure to bring some tense moments!

Speaking of tense moments, there’ll be many more those at the Quartermaine mansion. Nelle Benson Archer (Chloe Lanier) will insist she’s not going anywhere, so Ned Quartermaine (Wally Kurth) obviously won’t be thrilled. He’ll seem confused and agitated as he asks Tracy Quartermaine (Jane Elliott) what Nelle’s doing in their living room.

It turns out there’ll be a slight change of plans for Nelle. Michael Corinthos (Chad Duell) intends to keep Nelle close – but not too close! He’ll determine that the boathouse is close enough, so Nelle will fume over the change of venue.

Despite the setback, Nelle will rev up her efforts to secure serious Quartermaine money. She’ll think she can annoy her way to a check with plenty of zeros.

Other General Hospital spoilers say Anna Devane (Finola Hughes) will have Peter August (Wes Ramsey) in her thoughts. She’ll wrestle with whether Peter’s a changed man or as sinister as ever.

It looks like Anna’s mind will wander to a dark area as she considers the sinister secrets Peter’s keeping. In Tuesday’s preview video, Peter can be seen telling Anna nobody’s going to save her.

Anna sports an unnerved expression as she sits on the staircase with Peter. Could this lead to an attack and potential fall down the stairs – if only in Anna’s spooky fantasy? Regardless, Anna’s concerns about Peter will grow stronger, but she’ll fight them every step of the way.

Next, Sam McCall (Kelly Monaco) will try to team up with Hamilton Finn (Michael Easton). She’ll test the waters on making Finn her ally, but she’ll face some resistance.

Finn will contend that Anna’s careful not to share much with him, but he’ll be fibbing a bit. He actually knows about Peter’s connection to the hitman, which involved their mutual time at a DVX front company called Eurotech.

Finn won’t pipe up about that just yet, but he’ll indeed spill some shockers to Sam and Jason Morgan (Steve Burton) within the next few episodes. General Hospital spoilers say some exciting drama’s coming up. We’ll give you updates as other GH news emerges. Stick with the ABC soap and don’t forget to check CDL often for the latest General Hospital spoilers, updates and news.