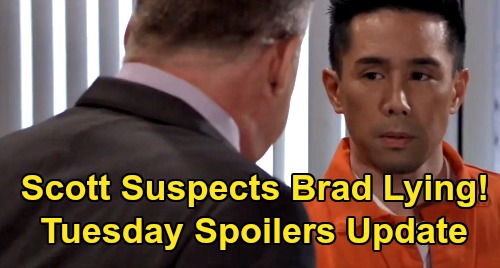 General Hospital (GH) spoilers update for Tuesday, March 10, teases that Mac Scorpio (John J. York) will host a special gathering at The Floating Rib. He’ll think Marcus Taggert’s (Real Andrews) loved ones should gather to pay their respects and reflect on fond memories. Jordan Ashford (Briana Nicole Henry) will suggest a toast to Taggert, which the attendees will happily join in on.

Unfortunately, there’ll also be some drama at this gathering. Trina Robinson (Sydney Mikayla) has been struggling to cope with Taggert’s death, so she’ll be looking for somebody to lash out at on Tuesday. It turns out Curtis Ashford (Donnell Turner) will end up on the receiving end of Trina’s fury. He’ll look taken aback as Trina accuses him of being the reason her father’s dead.

It won’t be long until Portia Robinson (Brook Kerr) rushes over and tries to calm her daughter down. She’ll do her best to get Trina through this difficult ordeal, but it won’t be easy. Speaking of difficult ordeals, Brad Cooper’s (Parry Shen) going through one of his own. Of course, it’s Brad’s own fault for agreeing to Nelle Benson Archer’s (Chloe Lanier) baby swap plot.

Julian could face a grim fate if Sonny learns he was part of the cover-up, so that’s certainly not something he’s interested in. He’ll do whatever he can to keep his part in the chaos under wraps. As for Sonny, he’ll try to calm a concerned Michael Corinthos (Chad Duell). This Nelle mess will still have Michael all bent out of shape, but Sonny will feel certain that it’s all going to work out.

Naturally, Sonny could take matters into his own hands if need be! If Nelle were to get her hands on Wiley Quartermaine-Corinthos (Erik and Theo Olson), Sonny could always resort to drastic – and deadly – measures to keep Nelle away. Regardless, Sonny will be brimming with confidence in Tuesday’s GH episode.

Back with Brad, he’ll face Sonny’s fierce anger. Within the next episode or two, Sonny will find Brad and manhandle him a bit. Sonny will offer a dark warning, so Brad had better listen up! Perhaps Sonny will contend that if Brad scores his freedom, he’ll still have a target on his back. Roaming around Port Charles may not be in Brad’s best interest if Sonny has anything to say about it.

Meanwhile, Alexis Davis (Nancy Lee Grahn) will be in panic mode. General Hospital spoilers, news and updates say Alexis will fret over that hot hookup with Neil Byrne (Joe Flanigan). They thought they could handle the risk, but they surrendered to temptation instead. Now Neil’s hearing is rapidly approaching, so Alexis will worry about the outcome if Neil’s honest.

Neil could lose his career if he tells the truth, but Neil may remind Alexis that they could be together. He might make another pitch on Tuesday, but it appears Alexis will dismiss it. She may think their only options are to lie or dance around the real story. All this sounds like a recipe for disaster, so don’t miss the excitement ahead.