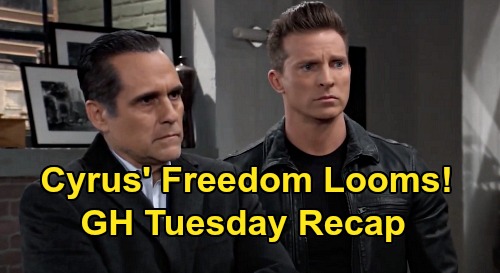 General Hospital (GH) spoilers recap for Tuesday, March 24, reveal that Brook Lynn Quartermaine (Amanda Setton) sat in the PCPD jail when Harrison Chase (Josh Swickard) came in to say that she was being released and that the Metro Court wouldn’t press charges if she paid for the damages. Chase then showed her the Invader article detailing her brawl with Lulu Spencer (Emme Rylan), and he assured her great he wasn’t pressing charged either.

Maxie and Sasha were horrified to learn that Valentin was the new angel investor for Deception, and they blasted Lucy for not disclosing this earlier. Valentin remained smug while Sasha said that she’d have to rethink her involvement in the company and left. Valentin then turned to Maxie and said that she was right to ask Nina Reeves (Cynthia Watros) for more, and Maxie reeled as Lucy chased after Valentin for a chat.

At Crimson, Nina juggled phone calls, clearly needing another assistant, when Nelle Benson Archer (Chloe Lanier) walked in and offered to take Maxie’s old position. Nina balked and threw Nelle out, but Nelle returned, saying that she’d accept an entry-level position. Nina surmised that Nelle wanted to prove that she was a responsible parent for her upcoming custody case, and Nelle was upfront about that.

Nelle then got under Nina’s skin by bringing up how they had so much in common – after all, they each had a child kept from them. Nelle even took some messages for Nina and tried to show her that she’d be a good assistant. Nina was about to throw Nelle out again, but then Nina flashed back to Willow Tait (Katelyn MacMullen) saying what a despicable person Nelle was. Nina changed her mind and hired Nelle on the spot.

Brook Lynn came home and quickly learned that Ned planned to acknowledge her mistake publicly and terminate her from ELQ. Brook Lynn was livid that her dad was going to throw her under the bus, but Ned argued that she had put sensitive documents on Facebook, and that the board required swift action. Brook Lynn left the room in a huff, then privately called Linc to say that if he still wanted her shares of ELQ, then he had a deal.

Out in the foyer, Michael welcomed Sasha home. Sasha was upset about Valentin’s involvement in Deception, but Michael encouraged her to make it work. They went upstairs to check on Wiley Quartermaine Corinthos (Erik and Theo Olson), then Michael came racing down the stairs, yelling at Sasha that he was pulling the car around and they had to get Wiley to the hospital.

At Kelly’s, Harmony Miler (Inga Cadranel) and Willow had breakfast and talked. Willow inquired about Harmony’s new car, and she asked what was going on. Willow said that she could tell that Harmony was worried about something, but Harmony brushed it off, saying simply that there was nothing that she wouldn’t do for Willow.

All of this worried Willow, and after Harmony left, Willow said that she now knew that something was wrong with her mother. Chase thought that Harmony seemed like she was about to make a confession, and Willow worried because Harmony was talking like they might never see each other again.

Next, at Jordan Ashford (Briana Nicole Henry) and Curtis Ashford’s (Donnell Turner) place, Jordan first denied that TJ Ashford (Tajh Bellow) had been kidnapped, but soon she blurted out, “Yes, ok, they have my son!” Jordan broke down in Curtis’ arms, and she then recounted how Cyrus Renault (Jeff Kober) sent a messenger to her about TJ.

Jason Morgan (Steve Burton) immediately knew the messenger was Harmony, and Jordan filled Jason and Sonny Corinthos (Maurice Benard) in on the whole story about how she was part of a team deep under cover in Cyrus’ organization. Sonny quickly figured out that Jordan had framed Cyrus, and Jordan explained how she was the last team member standing.

Curtis did some thinking aloud and realized that Cyrus must want something bigger from Jordan than just a drug shipment getting through, and Jordan admitted that Cyrus wanted her to free him from prison. Curtis then said that Jordan was not going to confess to framing Cyrus, but Jordan said that she had to, if she wants to see TJ again. Sonny said, “That’s exactly what you have to do.”

That was a terrific episode of General Hospital, and there’s much more to come this week, so stay tuned! Stick with CDL for all the latest GH spoilers and updates, and we’ll let you know about the latest breaking GH news.