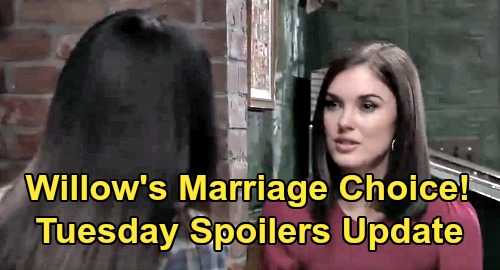 Even so, Willow might give the suggestion a little more thought. Maybe Willow will speculate on this potential marriage to Michael and what the outcome would be for Wiley.

It could mean the difference between Michael keeping custody and Wiley ending up with Nelle Benson Archer (Chloe Lanier). There’s a lot at stake here, so Willow will want to weigh her options carefully.

Other General Hospital spoilers say Maxie Jones (Kirsten Storms) will head off for her first day at Deception. Lucy Coe (Lynn Herring) will happily welcome Maxie to the company and explain her vision moving forward. Maxie should be hopeful about her new job, but working with Lucy may present a few challenges!

Speaking of challenges, one will sashay right into Nina Reeves’ (Cynthia Watros) office. Nelle will show up hoping to fill Maxie’s old position, but Nina will pump the brakes initially.

What makes Nelle think she’s qualified or that Nina would even consider it? Nelle will make some good points during her forced interview, but Nina will still think this is all part of Nelle’s custody game plan.

GH spoilers say Nelle will confess that’s indeed her angle, but she won’t see why that should be a problem. After Nina mulls everything over, she’ll determine that it’d be a good idea to keep Nelle close by. Nina will want to keep tabs on Nelle and fill the Corinthos clan in if Nelle raises suspicions.

Sonny pushed Jordan to admit that Cyrus Renault (Jeff Kober) has TJ Ashford (Tajh Bellow), so Jordan may have to come clean on Tuesday.

However, Jordan will take a different stance on what to do next. Since TJ’s life is on the line, Jordan may insist on getting Cyrus out of the slammer – just like he demanded. Sonny and Jason might think that’s a terrible plan, but Jordan will do whatever it takes to save her son.

Brook Lynn wound up getting arrested, but she’ll score her freedom and get down to business soon enough. General Hospital spoilers say a vengeful blow’s headed Lulu’s way, so stay tuned for updates on what Brooke Lynn has in store.

CDL will have more GH news and story scoops as they come in. Are you rooting for Brook Lynn or Lulu in this bitter battle? Be sure to pop in frequently for fantastic General Hospital spoilers, news and updates.

“I’m in time for the big celebration!” #GH pic.twitter.com/KtyEbuxmcf