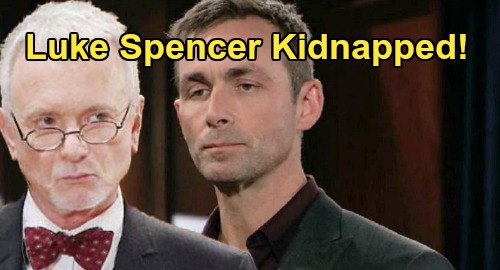 General Hospital (GH) spoilers tease that Valentin Cassadine (James Patrick Stuart) may resort to drastic action. There’s a good chance Valentin is behind a recent mystery according to GH buzz. Tracy Quartermaine (Jane Elliot) mentioned that some so-called investors got in touch about Dillon Quartermaine’s (Robert Palmer Watkins) shares. She thought she got rid of them, but they ended up turning to Luke Spencer (Anthony Geary).

Luke was in some of his usual trouble due to counterfeit tulips, so these supposed investors offered to help in exchange for shares. Tracy intervened, but it felt significant for GH to bring Luke up.

After all, there were plenty of Tracy mentions before her comeback. General Hospital was setting up Tracy’s return – and now they may be setting up Luke’s.

It feels like there’s been a push at GH recently to draw from history a bit and bring back some fan favorites. In addition to Tracy, viewers have also been treated to the return of Marcus Taggert (Real Andrews).

Of course, Luke’s comeback would be welcomed by many viewers as well. He made a very brief appearance when Tracy exited the show, so it’d be fitting for him to return during her latest stint.

Since General Hospital has been throwing in some surprising comebacks, it’s reasonable to think they might’ve contacted Geary about doing at least an episode or two.

That brings us Valentin again and whatever twisted moves he might have in store. How far will Valentin go to gain control of ELQ? Whether Valentin gets what he wants or not, Luke could land in some danger.

Valentin’s a major international criminal with no real moral code. He’s got a soft spot for Charlotte Cassadine (Scarlett Fernandez), but that’s it.

Could Valentin have Luke kidnapped as part of his plot? It’s certainly something Valentin would be willing to do if the need arises. Luke could be used as leverage if it comes down to it and Valentin decides he’s done playing games.

This could also be the kind of storyline that many fans have been hoping for – a big action and adventure story like those of yesteryear. It’d be fun to see how Luke would get out of a jam like that. He might get some help from shocking heroes if that’s the route GH takes.

It’s a great option to think about as Valentin gears up for more ruthlessness! Do you think Anthony Geary will reprise his role as Luke Spencer? Could Valentin have Luke kidnapped at some point? We’ll give you updates as other GH news comes in. Stay tuned to the ABC soap and don’t forget to check CDL often for the latest General Hospital spoilers, updates and news.