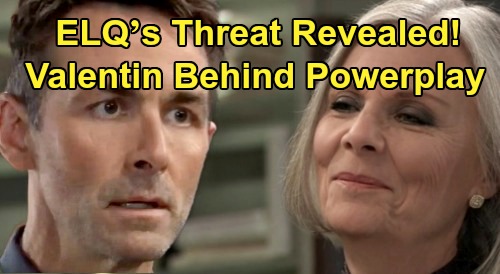 Nelle’s serving as a good distraction for the Quartermaine family and Corinthos clan right now. That was pointed out in Valentin and Martin’s recent conversation, so it’s clear there’s a deeper agenda here.

They need Nelle’s drama to keep everyone busy while they take care of business. Perhaps a little of that business has already been underway!

General Hospital viewers will recall that Tracy Quartermaine (Jane Elliot) told Ned Quartermaine (Wally Kurth) about someone making a play for ELQ. She didn’t know who was behind that play, but it’s looking more and more like it was Valentin.

After Tracy rejected the so-called investors, they went to Luke Spencer (Anthony Geary) and offered to get him out of a spot of trouble in exchange for shares.

Tracy shut all that down, but this is far from over. It appears Valentin may be gearing up for an ELQ takeover, so that could lead to quite a war.

Valentin might be working several angles here as he tries to score a safety net. After all, Valentin could be stripped of the Cassadine fortune soon enough. If the codicil checks out and Nikolas Cassadine (Marcus Coloma) achieves victory, Valentin will be down but not out.

This ELQ upheaval could be the perfect way to keep Valentin involved in a major story and leave him poised to win like he always does.

Of course, perhaps Valentin shouldn’t be so confident as long as Tracy is in town. She could be a formidable foe since she’s very protective of ELQ – and her family despite her complaints about them. If Valentin goes too far, he may regret it!

General Hospital spoilers say this ELQ battle will lead to some hot drama, so don’t miss all the action. Is Valentin the mysterious threat Tracy mentioned?

Are you hoping Tracy finds a way to crush the competition? We’ll give you updates as other GH news comes in. Stay tuned to the ABC soap and don’t forget to check CDL often for the latest General Hospital spoilers, updates and news.