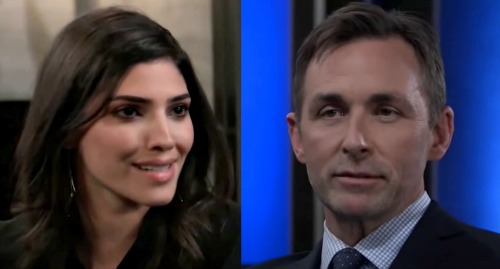 General Hospital (GH) spoilers reveal that Valentin Cassadine’s (James Patrick Stuart) recent conversations could offer some hints about his future. First, Valentin talked to Anna Devane (Finola Hughes) about all the gifts he’d been buying for Charlotte Cassadine (Scarlett Fernandez) – one of the joys of being a “girl dad.”

Later, Valentin found out Peter August (Wes Ramsey) and Maxie Jones (Kirsten Storms) were having a baby girl, so he talked to Peter as a soon-to-be fellow “girl dad.” This “girl dad” theme was repeated throughout the December 21 episode.

Peter doesn’t realize his mother is the equally dangerous Alex Devane Marick (Finola Hughes), so he has a tough shocker in his future.

However, what we want to focus on here is a bombshell that’s brewing for Valentin instead – specifically a baby bombshell! With all this talk about “girl dads” and relief, it seems like the prime setup for Valentin to ultimately have a son.

General Hospital spoilers say Brook Lynn Quartermaine (Briana Lane) was most likely pregnant with Valentin’s child when she left Port Charles. GH writers heavily implied it and probably intend to pick the story back up once Amanda Setton returns from her maternity leave down the road.

It looks like it’ll take some time before that happens, but that fits perfectly with this hot plot. Once Brook Lynn reenters the picture, she may have a bouncing baby boy in her arms.

After Valentin finds out he has a child with Brook Lynn, he’ll have to wrap his head around that stunning news. Then, Valentin may have to get used to the idea of having a son!

Peter suggested that with a daughter, he’d just see a beautiful little girl filled with light. That’s undoubtedly how Valentin sees Charlotte as well. It’s also why Valentin nearly chose to walk away from Charlotte a few months back.

Valentin was concerned about his dark tendencies starting to rub off on Charlotte, but he ultimately came to his senses and decided to remain in her life.

What happens if Valentin gets a son the next time around? Part of Valentin may be fearful, but another part of him may grow to like the thought of having a boy – someone he can mold to be like him.

We could see a real inner battle as Valentin considers what kind of man his son might turn out to be. Valentin may have some pretty complicated feelings about Charlotte’s younger brother.

Regardless, Valentin probably has a baby boy in his future, so we’ll see how things turn out! As other GH updates emerge, we’ll keep you posted.