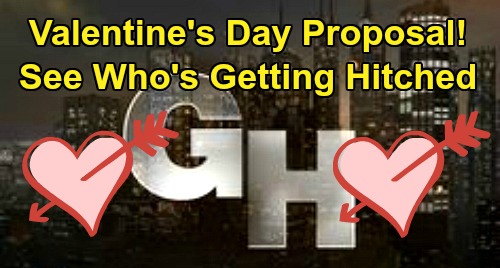 General Hospital (GH) spoilers tease that Valentine’s Day is just around the corner, so it’s time to start thinking about this romantic holiday. Of course, Valentine’s Day should be a bit late in Port Charles this year! Impeachment trial coverage is throwing off GH’s schedule, but fans’ patience will be rewarded eventually. Some great episodes are coming up that should draw viewers right back into the action.

As for Valentine’s Day, love should be in the air as usual. There are always plenty of romantic moments once this lovey-day holiday hits. Will there be any engagements this year? It seems likely that at least one GH character will pop the question, so let’s consider who might be planning a wedding soon.

For starters, T.J. Ashford (Tajh Bellow) has been mulling over the marriage idea for a while now. He even asked Alexis Davis (Nancy Lee Grahn) for permission to propose to Molly Lansing Davis (Haley Pullos), which brought a surprising reaction.

Alexis pointed out that permission was the last thing Molly would want T.J. to be asking for. Molly marches to the beat of her own drum and doesn’t need her mom’s approval to do it. However, we haven’t heard any more developments on the engagement front. Stella Henry (Vernee Watson) had some advice for T.J. before he took this step, but he it still seems like a step he intends to take.

Will T.J. propose on Valentine’s Day? Will Molly accept T.J.’s offer of marriage and start planning a long-term future with him? That’s one option to consider for the Valentine’s Day festivities to come.

Of course, there are other couples that are in the right place for a proposal. No one would be surprised if Peter August (Wes Ramsey) popped the question to Maxie Jones (Kirsten Storms). It’d be the perfect way to raise the stakes before everything fell apart.

Harrison Chase (Josh Swickard) also adores Willow Tait (Katelyn MacMullen) enough to go all in with her. It might be moving a bit fast, but Chase and Willow are deeply in love. They’ve already had in-depth discussions about their future.

As Willow deals with more Nelle Benson Archer (Chloe Lanier) and “Wiley Cooper-Jones” (Erik and Theo Olson) drama, a proposal from Chase might help her feel secure – like she’ll always have someone who’s got her back. “Chillow” fans would certainly like to see an engagement for these two soon!

T.J. and Molly seem like the best option, but that doesn’t mean there can’t be more than one proposal this year. Whether any engagements happen or not, Valentine’s Day 2020 should be a memorable one.