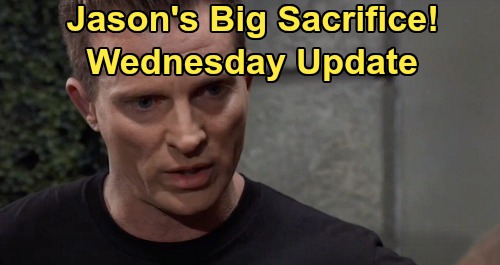 General Hospital (GH) spoilers update for Wednesday, April 15, teases that Jason Morgan (Steve Burton) will have to say goodbye. It appears Jason will talk to Danny Morgan (Porter Fasullo), who should get an age-appropriate explanation for all the Cyrus Renault (Jeff Kober) drama. Jason will insist he can’t be around for a while, but he’ll want Danny and Scout Cain (Ella Ramacieri) to know he loves them.

This is about keeping Sam McCall (Kelly Monaco) and the kids safe, so Danny should understand on some level. If Jason doesn’t have his own chat with Scout, Danny may vow to fill his sister in.

He’ll certainly promise to step up for Sam and Scout until they can all be a family again. That’s everyone’s ultimate goal here, but getting Cyrus out of the way is the more pressing matter.

Sonny Corinthos (Maurice Benard) will speak with someone in his kitchen on Wednesday. He’ll talk about somebody else needing a heads-up, so we’ll see who gets a warning.

Whatever the case, Jason’s making a big sacrifice by staying away from his family to protect them. Although Jason will squeeze in a couple conversations with Sam here and there, his time away from his kids will remain difficult.

Meanwhile, Harrison Chase (Josh Swickard) will marvel over just how fun Hamilton Finn (Michael Easton) has become. Chase will see all the party prep Finn’s done for Violet Barnes’ (Jophielle Love) birthday bash and love this side of his brother.

In a moment alone with Olivia Quartermaine (Lisa LoCicero), Robert Scorpio (Tristan Rogers) will deliver some disheartening updates. It looks like Robert will have some tough news to report regarding Dante Falconeri (Dominic Zamprogna), but an emotional Olivia will hang in there. When it comes to Dante, Olivia’s never giving up on his recovery and return.

That may apply to Lulu and Valentin Cassadine’s (James Patrick Stuart) never-ending war or perhaps another round of Valentin’s battle with Nikolas Cassadine (Marcus Coloma).

Charlotte will stir up some mischief of her own in Wednesday’s GH episode. Since Charlotte’s struggling to get interested in this party, she intends to add a little interest herself.

Charlotte has access to her papa’s credit card, so she’ll make a big purchase at Roger’s Reptile Roundup. Soon enough, Charlotte will have a bunch of snakes – just waiting to hiss, slither and scare everyone at this bash.

Charlotte will slide snakes into the guests’ bags and wait for the real show to start. General Hospital spoilers say Anna Devane (Finola Hughes) will cry out in panic as she returns to the living room. There’s a good chance snakes will be crawling all over the place by then.