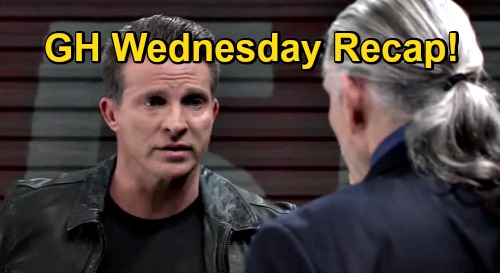 Jackie wondered if Anna thought that Harrison Chase (Josh Swickard) should know, and Anna said it wasn’t her place to say either way.

Meanwhile, at the plaza, Gregory Chase (Gregory Harrison) was telling Finn how proud he was of him when Alexis Davis (Nancy Lee Grahn) walked up drunk and boisterous.

Alexis had cut her hand on a glass, and she was bleeding, so Finn suggested that they go to the hospital so he could stitch her up. Alexis met Gregory, telling him that she and Finn slept together and that Finn didn’t even die.

At the Corinthos house, Laura Collins (Genie Francis) told Carly Corinthos (Laura Wright) that she was Cyrus Renault’s (Jeff Kober) biggest weakness. Laura told Carly the story of how she and Cyrus are siblings, and she said that Cyrus transferred some of his feelings for his mother onto her.

Through their conversation, Carly learned that Cyrus’ mom was in a care facility in Vermont.

Laura said that if she worked things just right, then she might be able to neutralize Cyrus. Carly was thankful, and Laura left. Carly immediately called someone and left an important message.

Meanwhile, on Pier 55, Cyrus met with Jason Morgan (Steve Burton). Cyrus told Jason that he had a proposal, and that it would make life better for people in Jason’s immediate circle.

Cyrus said that he wanted Jason to open up the piers to allow him to land his product, and in exchange Jason would get 30% of the profit. Jason said that Sonny may come back, and Cyrus balked at that.

Jason said no deal, and Cyrus was disappointed. Jason said that Cyrus’ sniper had been taken out, and so Cyrus whipped out his gun and threatened Jason.

Jason ordered Brando and Cyrus on the ground, and Jason yelled, “Come after me again, and you’re dead!”

After everyone else was gone, Cyrus blasted Brando for not killing Jason, and he sternly reminded Brando that if anything happens to him, then all the information about him falsifying Dev Corbin aka Dev Cerci’s (Ashton Arbab) identity would go straight to the feds.

“Think about that the next time you wonder where your loyalties lie,” Cyrus warned.

At the hospital, Finn stitched Alexis up in an exam room. Finn said that he heard about Julian Jerome’s (William deVry) death, and Alexis started crying. Finn insisted on driving Alexis home, and Alexis didn’t want that, but Finn insisted. Alexis asked Finn to call Ned Quartermaine (Wally Kurth) instead.

Tracy was laying it on a little thick, which both Ned and Olivia noticed. Soon, Finn called to ask Ned to come get Alexis. Tracy offered to go, as did Olivia, but Ned said that he’d go.

Back at the Metro Court, Cyrus and Brando arrived, and Cyrus immediately went to the bar for a drink. Soon, Laura came along and asked if they could have routine talks about keeping the peace in Port Charles.

“Will you meet me halfway?” Laura asked. Cyrus said that he’d be happy to work with Laura on the matter. Laura left cordially, and Cyrus seemed pleased.

Back at Anna’s place, Finn and Gregory returned to find Anna and Jackie still talking. Jackie told Gregory in a moment alone that Robert Scorpio (Tristan Rogers) invited her to Finn and Anna’s wedding, so she might attend, if it was ok with Finn. Finn returned and said that it would be fine.

Back at the Corinthos house, Jason and Carly returned and Jason fumed at Carly for interfering in his meeting with Cyrus. Jason said that he had things under control, and that he wouldn’t have been able to take it if something had happened to Carly.

Carly defended her actions in showing up at the pier, but Jason said that her presence prevented him from killing Cyrus.

Back at the Metro Court, Cyrus answered his phone and was dismayed at what he heard. Brando rushed over and asked what was wrong. “They have my mother,” Cyrus fumed, as he knocked the glasses off the bar.

Finally, back at the hospital, Alexis and Ned were talking in the hallway about not telling Olivia about their affair when Olivia arrived. “I thought maybe Alexis could use a female friend,” Olivia said. Alexis said that no help was needed, and that she was fine. Alexis took off.

There’s certainly a lot going on right now on General Hospital, so stay tuned! And don’t forget to check CDL regularly for the latest General Hospital spoilers and news. We’ve got you covered!