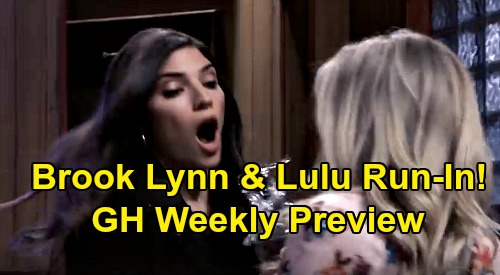 General Hospital (GH) spoilers tease that we’re in for a week of major family drama. The new GH promo for the week of January 13 is all about the family conflicts taking place in the Quartermaine, Cassadine, and Corinthos families, and it looks like some major action is going to take place, so let’s get right into it!

As GH viewers know, Ava finagled a marriage with Nikolas after she revealed that she had the codicil naming Nikolas the rightful heir of the Cassadine fortune. But it seems that Ava’s not giving up the location of the original version of the codicil – and that’s a good safety measure on her part.

She’s shown in the GH promo with Nikolas, telling him sweetly, “You won’t kill me, Nikolas.” He replies back, “What makes you so sure?” She then kisses him on the cheek, so she’s clearly got some plan in place to protect herself – or at least it certainly seems like she does, since she looks awfully confident!

In other Cassadine drama, Alexis Davis (Nancy Lee Grahn) is shown sitting down for a big talk with her daughter Sam McCall (Kelly Monaco). Sam gears up for a big conversation by asking Alexis if she’s ready for this, prompting Alexis to say, “Oh God, what?”

Sam could be about to tell Alexis about her deal with Robert Scorpio (Tristan Rogers), where she’s promised dirt on Peter August (Wes Ramsey) in exchange for a new parole officer.

If that’s the case, then Alexis could soon know about the various misdeeds that Sam and Jason Morgan (Steve Burton) think that Peter has committed.

Of course, GH viewers know that Sam and Jason are 100% right in their theory about Peter shooting the OR gunman who he hired to take out Andre Maddox (Anthony Washington) and Franco Baldwin (Roger Howarth) – they just need some solid proof, which could be tricky!

Next, the promo addresses some Quartermaine drama, with Brook Lynn Ashton (Amanda Setton) literally running right into Lulu Spencer (Emme Rylan) at the Metro Court. Of course, these two don’t get along at all and have a long history of animosity toward each other, and it looks like that will stay re-ignited this week.

It looks like Brook Lynn will also get caught up in some family drama with her father Ned Quartermaine (Wally Kurth). Ned’s shown in the promo telling Brook Lynn that she wants to be a Quartermaine, then she has to start thinking like one.

Specifically, Tracy is shown shoving Ned out the front door of the Quartermaine mansion for some reason, then later in the promo she’s shown with Ned and Olivia Quartermaine (Lisa LoCicero) impatiently waiting for something from them.

As GH viewers know, Tracy is very vocal person, so whatever she’s unhappy about will likely get voiced loudly.

Michael Corinthos (Chad Duell) and Monica Quartermaine (Leslie Charleson) also make quick appearances in the promo, which probably means that Tracy will have some things to gripe about when it comes to ELQ.

Tracy must be back in town for a reason, and it could have to do with how she perceives the company is currently being run, which could spell real trouble for Michael.

“If you want to be a Quartermaine, you have to start thinking like one.” #GH pic.twitter.com/F2Oz4i3bbA