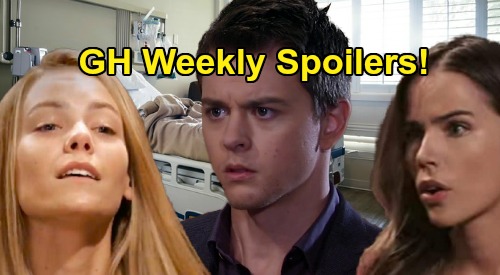 General Hospital (GH) spoilers for the week of January 20-24 tease that we’ll see growing frustrations and some fierce showdowns. For starters, Willow Tait (Katelyn MacMullen) will remain on edge over Nelle Benson Archer (Chloe Lanier). She’ll likely be irritated when Brad Cooper (Parry Shen) doesn’t seem eager to do anything about this threat.

Brad will end up making some strange moves that lead to questions. Willow will definitely wonder why Brad’s acting so weird, which could lead her to assume he’s hiding something.

Meanwhile, it’ll be Ava Jerome (Maura West) to the rescue! She’ll try to smooth things over in some tricky situation, so that may involve Nikolas Cassadine (Marcus Coloma) and Spencer Cassadine’s (Nicolas Bechtel) reunion.

Ava intends to tag along on this trip to France, so she may intervene if Spencer flies off the handle. Perhaps Ava can score some points with Nik if she helps him make amends with his son.

Whatever the case, Ava and Nikolas will soon be on the same page. It sounds like they’ll agree to give each other what they want, but things could get complicated if romantic feelings develop.

Valentin will face a court order, which could involve Nik’s next steps or perhaps the custody case surrounding Charlotte Cassadine (Scarlett Fernandez).

Over with Josslyn Jacks (Eden McCoy), she’ll be down on the docks when Michael Corinthos (Chad Duell) finds her. That location typically serves as a place for quiet reflection or a full-blown showdown.

No matter which it is for Joss, more Nelle drama is about to heat up. She’ll be rattled over some encounter – one that seemingly involves Sasha Gilmore (Sofia Mattsson).

GH spoilers say Michael will rush to Sasha’s defense soon after. He won’t think Sasha’s to blame for whatever goes down. As for Jordan Ashford (Briana Nicole Henry), she’ll get an SOS call and have to deal with an emergency around this time.

Jordan may soon find herself grilling Nelle and trying to figure out what the truth is.

As for Sonny Corinthos (Maurice Benard), he’ll console Mike Corbin (Max Gail) after another outburst. Sonny will also head to the emergency room later, so that could involve Mike or possibly the aftermath of the Nelle showdown.

Either way, Jasper “Jax” Jacks (Ingo Rademacher) is going to have some questions for Carly Corinthos (Laura Wright) soon. He may worry about Nelle and the threat she poses.

Elsewhere, Laura Collins (Genie Francis) will rise to the challenge. She’ll have a new project to tackle before Nikolas seeks her out. Nik will likely want to bring Laura up to speed on how things went with Spencer in France.

Finally, Hamilton Finn (Michael Easton) will pass along a harsh ultimatum. That may be for Nik – and it may involve tracking Hayden Barnes (Rebecca Budig) down or else! General Hospital spoilers say some great drama’s ahead, so stay tuned.