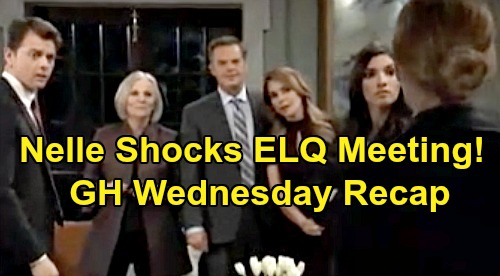 General Hospital (GH) spoilers recap for Wednesday, January 15, reveal that Lulu Spencer (Emme Rylan) and Dustin Phillips (Mark Lawson) were greeted by Laura Collins (Genie Francis) in the interrogation room at the PCPD. While Lulu explained to Laura what happened at the Floating Rib, Brook Lynn Quartermaine (Amanda Setton) explained it to Ned Quartermaine (Wally Kurth) out in the squad room.

Eventually, Harrison Chase (Josh Swickard) announced that everyone could go, since Mac Scorpio (John J. York) and Felicia Scorpio (Kristina Wagner) decided to drop the charges as long as they were compensated for the damages. Ned said he’d cover the damages, and everyone left.

Lulu and Dustin then headed to Lulu’s home, where Lulu pressed Dustin for details about his relationship with Brook Lynn. Dustin explained that they met in a bar where Brook Lynn was performing, and that she quickly dumped him and moved on. Lulu was totally understanding and wondered if Dustin had any nostalgia, and Dustin said a resounding no.

Meanwhile, at the Metro Court, Nikolas Cassadine (Marcus Coloma) arranged for a flight to France to see Spencer Cassadine (Nicolas Bechtel). Ava Jerome (Maura West) then came along and needled him about signing the post-nup agreement, which she just happened to have in her purse. He refused to sign it without a lawyer, and she reminded him that he wouldn’t get what he wanted until she got what she wanted.

Laura then came along, and Nikolas let her know that he was going to France to see Spencer tonight. Ava insisted that she was going with him, and they bickered about that until Laura reminded them that this was about Spencer, not them. Laura said that she wished she could trust Nikolas, and that she was worried he might pull another vanishing act. After Laura left, Ava and Nikolas went home to pack.

Next, at Shiloh Archer’s (Coby Ryan McLaughlin) memorial service, Nelle Benson (Chloe Lanier) addressed Michael Corinthos (Chad Duell), who wondered what Nelle was doing out of prison. Nelle simply said that good things happen if you believe. Nelle then turned to Willow Tait (Katelyn MacMullen), saying that the responsibility now falls on her to look after Wiley Cooper-Jones (Theo and Erik Olson), since Shiloh’s not around to do it.

Jason Morgan (Steve Burton) asked how Nelle made parole, and she said that she owed it all to Ryan Chamberlain (Jon Lindstrom) and her heroic action when Ryan was trying to escape. Jason then took off and told Michael not to give Nelle the attention she wants. Michael asked Nelle what she wanted, and Nelle replied, “I just want what belongs to me.”

Chase then walked in and confirmed that Nelle and Shiloh got married, while Nelle needled Chase and Willow about their relationship. Eventually, Nelle left, saying she had somewhere to be, and Chase talked with Willow, who revealed that she was going to be taking care of Wiley. Chase questioned whether that was a good idea, but in the end he supported her.

Next, Sonny Corinthos (Maurice Benard) and Carly Corinthos (Laura Wright) talked at home about Ava and Nikolas, with Carly quickly figuring out that Ava must have the codicil. Soon, Stella Henry (Vernee Watson) arrived, which surprised Sonny but not Carly. Turns out, Carly asked Stella to come and talk to Sonny about Mike Corbin (Max Gail). Stella learned about the New York study and thought it sounded promising, but noted that Mike was more advanced than the patients in that study

Still, Sonny insisted that he wanted to try the study for Mike, even if there was only a remote chance that it would give him more time. Stella didn’t agree, but she accepted Sonny’s viewpoint. As Sonny walked Stella out, Jason arrived and privately told Carly that Nelle made parole and was Shiloh’s widow. Carly wondered what Shiloh could have possibly given Nelle.

Finally, Tracy Quartermaine (Jane Elliot) made nice with Olivia Quartermaine (Lisa LoCicero) as Olivia prepped for the upcoming ELQ shareholders meeting at the Q mansion. Olivia figured Tracy was up to something and quickly realized that Tracy wants Ned to take over ELQ. Brook Lynn and Ned arrived from the police station, and once Michael finally arrived for the meeting, the first order of business was dealing with Oscar Nero Quartermaine’s (Garren Stitt) shares.

Michael tried to get a word in edgewise as the family argued over who should get the shares and Oscar’s conflicting bequests. As they were arguing, Michael seemed to be realizing that the bequeath to Shiloh might come with a new problem. Suddenly, Nelle walked in and said, “There’s no way you started the stock meeting without me, right?” Michael looked horrified, apparently realizing why Nelle wanted to marry Shiloh.