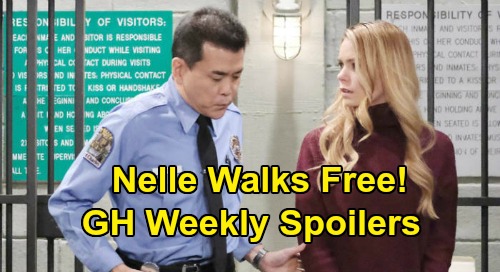 General Hospital (GH) spoilers for the week of March 2-6 tease that some shocking moments are on the way. First, there’ll be major chaos at GH. Several victims will be admitted thanks to Cyrus Renault’s (Jeff Kober) latest round of trouble. Once Laura Collins (Genie Francis) realizes Cameron Webber’s (William Lipton) life was on the line, she’ll fly into a rage. Laura will be ready to put this war to rest once and for all!

It looks like Laura will ultimately wind up at Pentonville for a confrontation with Cyrus. The mayor isn’t messing around! As for Sonny Corinthos (Maurice Benard), he’ll be furious over Cyrus’ actions, too. While Sonny plots his next move, Alexis Davis (Nancy Lee Grahn) will dish out legal advice to someone in need.

Brook Lynn Quartermaine (Amanda Setton) will also wind up blowing her top. If Julian Jerome (William deVry) doesn’t come through on his promise, that could be one reason why.

Across town, Michael Corinthos (Chad Duell) will need support from Ned Quartermaine (Wally Kurth). Life may get a bit tougher for Michael on Daddy duty. He could probably use a more help at ELQ, but he’d better watch his back.

Other General Hospital spoilers, updates and news say Harrison Chase (Josh Swickard) will worry about Willow Tait (Katelyn MacMullen). Willow’s new reality will bring some serious struggles – ones that Willow will have a hard time accepting. Chase just won’t know what to do, but he’ll hope Michael can offer guidance.

Although Michael’s child turned out to be alive, he went through the grieving process. Chase will be desperate for any tips on how to help Willow cope. Next, Jason Morgan (Steve Burton) will have some harsh words for Curtis Ashford (Donnell Turner). They’ll spar over all the Cyrus drama since Jason won’t think Curtis is giving him all the facts.

Jordan’s fury will be unleashed over Cyrus’ decision to put more Port Charles residents in danger. She’ll think Cyrus needs to be dealt with before anyone else in PC gets hurt.

As for Nelle Benson Archer (Chloe Lanier), she’ll apparently score her freedom and another fierce outburst from Carly Corinthos (Laura Wright). In addition to dealing with Carly’s rage, Nelle will have an interesting run-in with Alexis.

Next, Damian Spinelli (Bradford Anderson) will push Liesl Obrecht (Kathleen Gati) to reveal the truth. He may be hoping to obtain info that could put Nelle back behind bars. GH fans know Spinelli will always do whatever he can to help Jason and all his loved ones.

Anna Devane (Finola Hughes) will also have some questions for Liesl. There’ll be some Peter August (Wes Ramsey) issues in the week ahead as well, so he’ll feel like the walls are closing in. Peter will do his best to keep the charade going, but that could prove more difficult than he expected.

Over with Hamilton Finn (Michael Easton), he’ll strengthen his bond with Violet Barnes (Jophielle Love). Violet will undoubtedly still be missing her mom, Hayden Barnes (Rebecca Budig), but that at least she’s got Daddy to rely on.