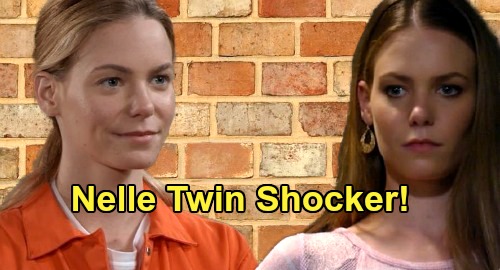 General Hospital (GH) spoilers reveal that Nelle Benson Archer (Chloe Lanier) recently made an intriguing comment – one that was out of the blue and really worth giving some thought. Carly Corinthos (Laura Wright) made her way over to see Nelle in lockup, where she quickly started ranting and delivering threats.

Of course, Nelle didn’t hesitate to push Carly’s buttons right back. She reflected on getting to know Ryan Chamberlain (Jon Lindstrom) behind bars and learning a lot from him.

Nelle suggested it was a shame Carly didn’t learn more from Ryan when they were together at Ferncliff, but she caught herself and wondered if that’d been Kevin Collins (Jon Lindstrom) instead. Notice that Ryan and Kevin are identical twins….

Nelle then made this intriguing comment, which might offer a hint about her future on the show. Nelle wished she had a twin so she could be two places at once. Are GH writers opening the door to a twin storyline? Does Nelle have a long-lost sister we don’t know about her perhaps an unrelated doppelganger that’ll enter the picture?

It was just such a weird thing for Nelle to say. Wishing for a twin is slightly odd, but it’s not unreasonable. Plenty of people without twins have said or at least thought that occasionally. However, the truly strange part was Nelle wishing to be two places at once. It feels like a setup for something that General Hospital writers may have cooking.

It’s possible some Nelle lookalike will cause problems – perhaps allowing for the real Nelle’s escape with Wiley Corinthos (Erik and Theo Olson) at some point. Nelle’s recent kidnapping was thwarted, which honestly felt like a missed opportunity.

There’s no reason why Nelle shouldn’t go on the run with Wiley for a bit before getting caught. GH needs to play up that angle for drama’s sake.

Then again, General Hospital spoilers, updates and news say pretty much everyone in town hates Nelle’s guts. The writers have all the makings of a murder mystery, so a twin could be useful in that case, too. Perhaps it could later be revealed that Nelle’s twin had been killed off instead of her. It’d be a shame to lose a fun psycho like Nelle!

Whatever the case, this twin possibility is an interesting one. It could serve as a way to keep Chloe Lanier around if there’s another character for her to play. General Hospital spoilers say some great action’s coming up, so don’t miss it. As other updates roll in, we’ll have some exciting news to pass along. You can always stop by CDL for the latest General Hospital spoilers.