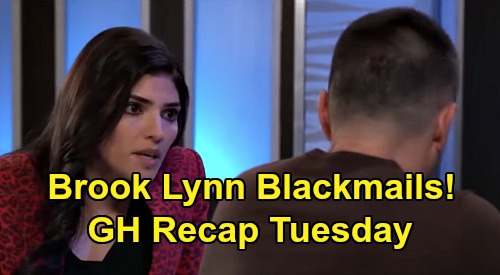 Olivia then promptly fired Brook Lynn, and Ned proceeded to tell her that she needed to get a job. He offered her a position at ELQ but she balked, saying that music was her life. Irritated, Ned told her that her free ride was over and that she needed to find a job.

Meanwhile, Dustin Phillips (Mark Lawson) arrived to talk with Carly Corinthos (Laura Wright) about the menu for the Midwinter Formal dance that will be at the Metro Court later, but Olivia informed him that he’d have to talk with her instead. She was chilly toward him, even when he tried to tell her that he wasn’t trying to replace Dante Falconeri (Dominick Zamprogna) in Lulu Spencer’s (Emme Rylan) life.

Still, Sam thought that something was up with Julian wanting to help Brad. Julian left, and Alexis and Sam talked about the situation with Neil Byrne (Joe Flanigan) and how Alexis is going to testify at his hearing soon. They also talked about Sam and how she’s going to try to dig up dirt on her parole officer in order to be able to be with Jason again.

At the bar, Brook Lynn approached Julian who was sitting alone. Brook Lynn called him out about seeing him arguing with Brad a while back, and about how the brakes on Brad’s car just happened to fail shortly thereafter. She threatened to go to Sonny Corinthos (Maurice Benard) with a theory about that, but Julian played it cool and simply asked her what she wanted. She said that perhaps he could do her a favor.

Meanwhile, in the Corinthos kitchen, Josslyn Jacks (Eden McCoy) stepped out for a moment, and Trina Robinson (Sydney Mikayla) and Cameron Webber (William Lipton) talked about their plan to make Josslyn jealous at the Midwinter Formal. Josslyn returned and noted that she didn’t feel up to the dance – she’d rather go see Wiley and do some journaling.

After some back and forth, Josslyn learned that Cameron and Trina were going to the dance together and was surprised. Dustin’s name then came up, and Josslyn realized that he’d be there, prompting her to consider going to the dance. Cameron and Trina left to go to the coffee shop, where they talked more about their plan to make Josslyn jealous and get her and Cameron together.

Next, at the Quartermaine mansion, Jason Morgan (Steve Burton) urged Michael Corinthos (Chad Duell) to have a plan when it comes to Nelle. Michael indicated that he was going to play by the rules, since the law is on his side. Later, Harrison Chase (Josh Swickard) visited with Michael in the foyer about the pretty strong evidence against Nelle, as well as Willow Tait’s (Katelyn MacMullen) grief.

Josslyn then visited with Michael and spent some time with her brother and Wiley. Michael told her that he decided to approach this whole Wiley situation with no regrets, and Josslyn relayed that she felt like she was starting to emerge from the darkness over losing Oscar Nero Quartermaine (Garren Stitt). She said that she was even going to the Midwinter Formal, and Michael was proud of her.

At the PCPD, Carly visited Nelle in jail and told her that she’d never see Wiley again. Nelle started in on the whole “Brad stole my baby” story, but Carly didn’t buy it, and she said that she hoped that the jury saw through her, but if she goes free then her first steps in the sunshine could be her last. Chase then arrived, and Carly left.

Chase asked Nelle to go over why she was at his apartment last night, and she told the same story about Brad stealing her baby and going over to the apartment just to hold Wiley. Chase then asked Nelle to explain the passports that were in her possession when she was apprehended, and she just stared at Chase blankly.

Finally. Carly returned home and met up with Jason. She spilled that she went to see Nelle, which Jason couldn’t believe. He told her that she just played right into Nelle’s hands, and he asked if she threatened Nelle. He was exasperated to learn that she did and told Carly that she needed to keep her cool and control her hatred for Nelle…for her kids’ sake.

There’s definitely a lot going on right now on General Hospital, so stay tuned! As more GH news comes in, we’ll give you updates. And don’t forget to check CDL often for the latest General Hospital spoilers, updates, and news.