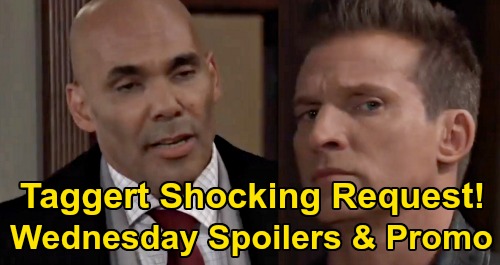 GH fans know Brook Lynn’s main needs right now are financial support and a way out of that crummy music contract. Brook Lynn may be expecting Julian to pitch in on all that, but General Hospital spoilers, updates and news say he won’t appreciate this blackmail plot.

Wednesday’s GH preview video shows Brook Lynn snapping at Julian. She’ll wonder if Julian’s going to help her or not. Brook Lynn will undoubtedly remind Julian of how much he has to lose if she doesn’t get what she wants!

Other General Hospital spoilers say Josslyn Jacks (Eden McCoy) will have a conversation with Dev Cerci aka Dev Corbin (Ashton Arbab). They’ll probably address Dev’s boarding school plans, so Joss may wonder if this is really what’s best. She’ll insist she cares about Dev, but maybe they’ll ultimately choose to focus on the here and now. Dev and Joss may end up attending that winter formal together.

Meanwhile, Carly Corinthos (Laura Wright) will get her daily dose of ranting at someone. She clearly needs an outburst a day to survive. This time it’ll be Ava Jerome (Maura West) who faces Carly’s tirade. They’ll trade barbs over Ava’s new marriage, but Carly won’t think Ava’s going to be Nikolas Cassadine’s (Marcus Coloma) wife for much longer.

Next, Nik will approach Liz and once again seek someone to lean on. Liz dialed down her anger during their recent discussion, but that was mostly because they were discussing Spencer Cassadine (Nicolas Bechtel). She may not be as willing to listen this time around, especially if Nik wants to complain about Ava.

General Hospital fans know Liz is still miffed about missing Hayden Barnes (Rebecca Budig) and all the destruction Nikolas caused. She’ll declare that Nik made his choices and now he’ll have to live with them. That includes Nikolas’ marriage and whatever issues that brings to his life.

At GH, Laura Collins (Genie Francis) will have questions about this mob battle that’s revving up. She’ll ask Jordan Ashford (Briana Nicole Henry) and Curtis Ashford (Donnell Turner) who would be stupid enough to take on Sonny in the first place.

This is a tricky situation due to Jordan’s history with Cyrus Renault (Jeff Kober), but it’s a bad idea to leave the mayor of the loop on the Cyrus’ dark plans. Perhaps Laura will receive information on a need-to-know basis for the time being.

Across town, Marcus Taggert (Real Andrews) will pay Sonny and Jason Morgan (Steve Burton) a visit. As CDL predicted, He’ll insist they may have a mutual problem, so this could require teaming up. Taggert may be Sonny’s enemy, but Cyrus is a far bigger one right now. Joining forces may be the only way to shut down Cyrus for good.

It looks like the excitement’s revving up in Port Charles. Don’t miss all our GH updates and news as these storylines get even hotter. CDL will have all the latest General Hospital spoilers and details for you.