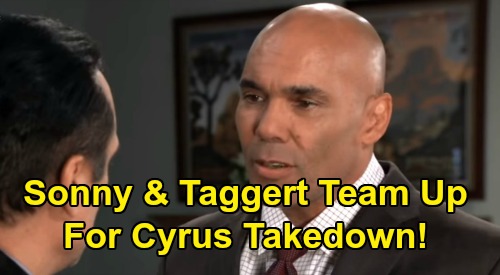 General Hospital (GH) spoilers tease that Jordan Ashford (Briana Nicole Henry) will realize Cyrus Renault (Jeff Kober) is following through on his threat. Since Jordan is Port Charles’ police commissioner, Cyrus has big plans to watch her suffer. He basically suggested he intends to burn PC to the ground – and he’ll soon take another step toward making it happen.

GH fans can expect a major attack soon enough. It looks like it may tie in with the teens’ winter formal, but we’ll see how it all plays out. Regardless, General Hospital spoilers say some sort of disaster will strike and lead to multiple victims. They’ll all be rushed to GH, which will leave Sonny Corinthos (Maurice Benard) looking for answers.

Soon after, Jordan will be livid over the updates she receives. Jason Morgan (Steve Burton) will also end up cornering Curtis Ashford (Donnell Turner) and trying to pry some news out of him.

It looks like General Hospital is pulling all this together and setting the stage for an intriguing alliance. The good guys and the bad guys may have to team up to get the worst guys!

Sonny and Jason are portrayed as people to root for, but we can’t forget that they’re deep in mob business. In the cops’ eyes, they’re baddies. However, Jordan was beating herself up a bit recently since she was part of framing Cyrus.

It was for crimes Cyrus actually committed, but Jordan still broke the law. She doesn’t feel like she’s much better than the criminals she fights to lock up.

Even so, the one thing everyone can agree on is that Cyrus and his men are the true baddies. General Hospital spoilers say Jordan and Marcus Taggert (Real Andrews) may realize they need Jason and Sonny’s help. It’d be fun to watch Taggert and Sonny be forced into that situation. They hate each other’s guts, so a partnership would be pretty entertaining.

It might also be the only way a powerful man like Cyrus can be taken down. It took a team of four the last time around, so it should take a team now, too. This time it could be five with the inclusion of Curtis.

Perhaps Taggert, Jordan, Curtis, Jason and Sonny will all be instrumental in sinking Cyrus once and for all! General Hospital spoilers, updates and news point to some hot action, so stay tuned.

What do you think of Cyrus and this mob battle so far? Do you think Sonny and Jason should join forces with Taggert, Jordan and Curtis? Don’t forget to visit CDL regularly for some awesome General Hospital spoilers.