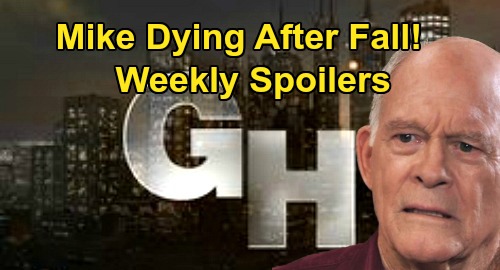 General Hospital (GH) spoilers for the week of March 30-April 3 tease that some scary moments are in store. For starters, Sonny Corinthos (Maurice Benard) will fret over his injured father. After Mike Corbin’s (Max Gail) terrible fall at Turning Woods, he’ll take a turn for the worse. Mike will rapidly deteriorate after this difficult blow, so that’ll be a lot for Sonny to wrap his head around.

Although Sonny knew Mike would fade away eventually, it’s always hard to say goodbye. Nevertheless, Sonny will have to accept that the end is near for Mike. He’ll feel like he’s failing his dad, who’ll be quite disoriented and upset throughout his ordeal at GH. Mike will be in bad shape, so that’ll certainly be tough for Sonny to handle.

Of course, this will all be on top of the Cyrus Renault (Jeff Kober) situation. Jason Morgan (Steve Burton) will get into an argument with Sam McCall (Kelly Monaco) in the week ahead, which may tie in with Cyrus.

There’ll also be concerns about the risks Sam’s been taking with Dolores Maloney (Andi Chapman). Between that and Cyrus’ threat, Jason will want to put some distance between them.

Although Jason will point out that it won’t last forever, the thought of a firmer separation won’t go over well with Sam. Since Sam can be pretty stubborn, she may not be willing to follow this rule. That could bring some danger as Jason and Sonny plot Cyrus’ murder.

Over with Curtis Ashford (Real Andrews), he’ll dig for more information on Marcus Taggert (Real Andrews). When Trina Robinson (Sydney Mikayla) finds out about that, she’ll be furious.

Curtis will get an earful once again – this time for not letting Trina’s dad rest in peace. Trina’s bound to be upset over the accusations hurled at Taggert, too. Jordan reluctantly plans to throw her old team under the bus.

Once Trina gets updates and realizes Taggert’s memory has been tarnished, there could be more trouble. Speaking of trouble, Laura Collins (Genie Francis) and Robert Scorpio (Tristan Rogers) could make some of their own.

They’ll face off with Cyrus, but these two may be no match for Cyrus and his twisted ways. It’s probably not a good idea to provoke this GH baddie!

Other General Hospital spoilers say Brando Corbin (Johnny Wactor) will show Carly Corinthos (Laura Wright) a more tender side of himself. Carly and Brando will strengthen their bond before Molly Lansing-Davis (Haley Pullos) goes to Brando for help.

Molly will be desperate for TJ Ashford (Tajh Bellow) answers, so she’ll hope Brando can pitch in on her latest mission to find him.

As other GH news becomes available, CDL will have all the details. It sounds like several storylines are heating up! Stick with us for fantastic General Hospital spoilers, news and updates.